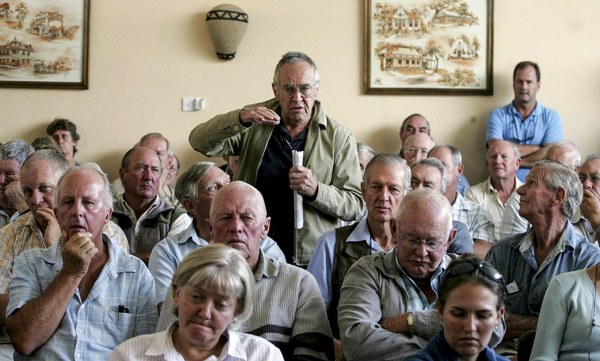 THE government’s message to exiled farmers is clear. Come home.

It is offering land leases to commercial farmers in an effort to re-start the nation’s agricultural industry.

Basil Nyabadza from the Agricultural and Rural and Development Authority says Zimbabwean farmers in Australia should return to home soil.

“We have a lot of capital resource dotted around the world, including Australia,” Nyabadza said.

“We are saying, if you are Zimbabwean, there is now a real opportunity to come back home with your skills and be part of the building team.”

The resignation of president Robert Mugabe last November and the swearing in of his successor Emmerson Mnangagwa has delivered significant change.

Government officials now admit the campaign of farm invasions that began in 2000 was a mistake.

“Clearly, the formulas deployed then, left a lot of bad feeling. And more importantly, the intellectual property, left our borders,” Nyabadza said.

Thousands of white farmers were forced off the land during the invasions.

Several farmers and farm workers were killed, many others were injured.

The Zimbabwean Government promised the program would redistribute farming land to Zimbabweans in need.

But many farms were taken by politicians and members of the ZANU-PF ruling party.

Agricultural production dropped dramatically and the nation once regarded as the bread basket of Africa struggled to feed itself.

The farm invasions have continued over the last 18 years and Mnangagwa was part of the government which allowed the seizures to continue.

Now farmers who lost everything are being asked to take the latest announcement in good faith.

For some former landholders, that is too much to ask. They will never return. Others are prepared to give it a try.

Nyabadza says public/private partnerships are the only way forward to restore trust.

“We are now in a new dispensation. And the challenge is now, we must rebuild our economy. In so doing, we need each other. So, we are reaching out,” Mr Nyabadza said.

David van Breda has returned to Zimbabwe after more than a decade farming in neighbouring Zambia.

He is now growing maize on leased Government land a short drive from Harare.

“My message is there is huge opportunity here in Zim, if you are prepared to come back and operate differently to how one was operating before.”

Mr van Breda’s maize crop is tall and even. Machinery dealers are bringing in the latest equipment from Brazil, so farmers can plant and harvest on a large scale. The farm is providing much needed work for dozens of local workers, at a time when Zimbabwe’s unemployment rate is up to 90 per cent.

“It’s very different. I think both sides of the disturbances have realised that we have to work together here,” Mr van Breda said.

Zimbabwe’s maize production dropped by more than 60 per cent after the farm invasions and then fluctuated.

A bumper harvest last year helped to restore some confidence, but there is still a long way to go.

Mnangagwa says the Government will pay compensation to farmers who lost their land during the farm invasions. But, the land will not be returned.

“The climate is still here, the soils are here’

Meanwhile millions of cash-strapped Zimbabweans are trying to feed themselves.

Even in Harare, small patches of land are planted with maize.

Pensioner James Vuma has a small crop of maize on the outskirts of the capital.

His plants are not as strong as those in the commercial fields, but he does the best he can. Growing his own food saves money, when he has little to spare.

“Here in Zimbabwe, we are not lazy guys. We want to work always. So, if I just stay without working, I don’t feel well”, Vuma said.

Zimbabweans are scheduled to go to the polls by August. Between now and then, Mnangagwa is trying to convince voters and the international community that he is the right choice to lead the country.

The end of the 37-year reign of Robert Mugabe has delivered new opportunities and expectations. Mnangagwa knows that reviving the agriculture sector will be one of the most important tests of his economic credentials. The race is on to entice commercial farmers back to their homeland.

David van Breda has a dry smile when asked if he has any advice for Zimbabwean farmers in Australia.

“If you are happy in Australia, stay there. But, the humour in this country is still here.

“The climate is still here, the soils are here. The path that we have all walked on in the past hundred years in this country has been up and down. But, I believe a lot of the historical problems have been resolved.”