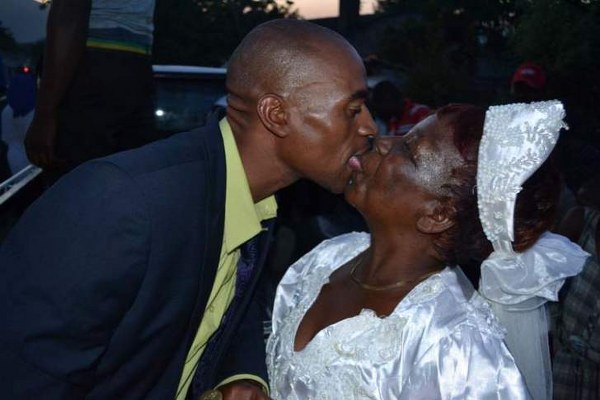 The mountainous city of Mutare is abuzz with the story of a 57-year-old shebeen queen who is cohabiting with her former tenant — 28 years younger.

Popularly known as Mbuya Sauti, Sophie Masikuka of Chineta in Sakubva is madly in love with her live-in boyfriend, Wellington Mabhiza, aged 29.

The lovebirds have become the talk of the town, with the affair causing ripples on social media and within the border city’s oldest high density suburb.

Opinion is sharply divided between liberals and conservatives, who claim the relationship is not consistent with norms and values applicable to a Christian society.

Undeterred by the criticism, last week the soulmates organised a symbolic wedding ceremony where they took their “marriage vows”.

No marriage officers were invited to preside over the “ceremony” and give it legal effect.

Nonetheless, food and drinks were served to invited guests.

Hundreds of curious people turned up to witness the “couple” exchange their “marriage vows”, with social media and the rumour going into a frenzy.

By and large, the “wedding ceremony” has triggered condemnation.

Not so much because of jealousy at an elderly woman finding love, but because of the nature of the relationship.

Mbuya Sauti said she will allow her husband to sire children with other women because she is past the child-bearing age.

“I told his mother that he is free to have a baby with another woman since I cannot bear a child with him,” she said after their “union” last weekend.

Mbuya Sauti’s attachment to Wellington is also being questioned after she revealed that some rituals needed to be performed on her Ben 10 before she could be intimate with him.

“We are now living under the same roof although we have not yet started having sex. We need to work on something before we do that,” she said.

The lovebirds have been seeing each other for two years.

Theirs is a relationship which started as a fling between a land lady and her tenant but it later grew stronger in the same manner Cleopatra and Mark Antony’s affair evolved.

Those who have been following the relationship blossoming claim charms could have been used to captivate the 29-year-old who is madly in love with a woman old enough to be her mother.

Mbuya Sauti does not recant these suspicions.

In fact, she suggested his attraction to her may as well be a result of supernatural powers.

“I have a spirit of a mermaid that attracts younger men,” she said.

It is said of women possessed with the spirit of a mermaid that their love is not possessive and neither is it furthered by controlling someone else’s life.

In general, they do not get sad, feel sorrow, or experience loss; or if they do, the experience is not prolonged.

Their romantic love involves bonding with one other person for a real mermaid’s love is not possessive in this way. Love is a property of water.

The ecstasy and bliss that water contains are not derived from a connection to one person. Love is in the rivers, the lakes, and the seas. This love encompasses the planet.

Love, then, is independent of relationships.

Consequently, those possessed by this spirit do not comprehend the idea of romantic attachment. They are definitely not co-dependent.

For Mbuya Sauti, her relationship to Wellington is not the first although she wants it to last.

The common thread in all her previous relationships is that she has a liking for younger men.

She fell in love with Mabhiza just after moving out of another relationship with a 35-year-old man.

While many are condemning her latest find on social media, accusing her of being a gold digger, she said she would buy her new husband a car to make him happy and reward him for his “hard work”.

Residents in Chineta who witnessed the ceremony claim the union was a taboo in the absence of the payment of lobola to her parents.

Mbuya Sauti has been in the news for all the wrong reasons altogether.

She is suspected of running a brothel in Chineta as well as another whorehouse near N Richards shop in Nyakamete heavy industrial area.

An official of a child rights organisation that once pushed for a police investigation into her business without success told the Daily News that they were horrified when police did not take any action against her, suggesting her charms shielded her from prosecution.

“We were interested in verifying allegations that were being raised by children we were working with but nothing fruitful came out of it.

“She had some sort of immunity that we never understood,” the official who declined to be named said.

The organisation had been losing girls that it has been trying to rescue from the streets in the eastern border city to child sex exploitation rings.

According to a report titled Young Women in Commercial Sexual Exploitation produced by the Zimbabwe National Council for Welfare of Children, 66,7 percent of girls that are sexually exploited are school dropouts.

It is alleged that brothels parade the vulnerable teenage girls to unscrupulous paedophiles who cherry pick the ones they want to have sex with and pay the brothel queens for quenching their sexual appetites.

It was in line with such suspicions that the local non-governmental organisation sought to have all brothels, including Mbuya Sauti’s investigated.