The battle for the MDC-T on Friday control took a nasty turn as the beleaguered vice president Nelson Chamisa’s supporters launched savage attacks on Tsvangirai’s family labeling them vultures.

The Tsvangirai family yesterday threw Chamisa under the bus in the party’s succession conundrum by confirming that only Engineer Elias Mudzuri met their father in South Africa where he is receiving treatment for colo-rectal cancer. This did not go down well with Chamisa’s supporters who launched scathing attacks on the social media.

On the receiving end was Tsvangirai’s daughter-in law who was roundly abused on social media with x-rated savage attacks by the mobs.

Chamisa’s sidekick Chalton Hwende went further and attacked Tsvangirai’s sons for what he purported to be unfair treatment of the under-fire wife Elizabeth Macheka. He wrote on his Facebook page:

“During the Past 2 years this woman stood by her Husband. She took him to all places for treatment and she abandoned her personal life and her business caring for her husband until a few days ago when she was banned from visiting him. Don’t lose heart Amai Elizabeth Tsvangirai continue staying in SA and pray for your husband all will be well. A lot of women have also passed through a similar road be strong.”

Hwende was backed by one of the MDC attack-dog Zexie Mushonga who labeled Tsvangirai’s kids vultures.

Tsvangirai’s family, which thanked the Government for the assistance it rendered to Mr Tsvangirai, said even they had limited access to the ailing opposition leader, with only Mr Mudzuri having met him twice. The development left Mr Chamisa with egg on the face after he claimed to have met Mr Tsvangirai in South Africa.

Mr Tsvangirai’s spokesperson Mr Luke Tamborinyoka has been releasing statements claiming that his boss had appointed Mr Chamisa as acting president of the party. MDC-T insiders allege Mr Chamisa was abusing his closeness to Mr Tsvangirai’s wife Elizabeth Macheka to foment chaos in the opposition party. 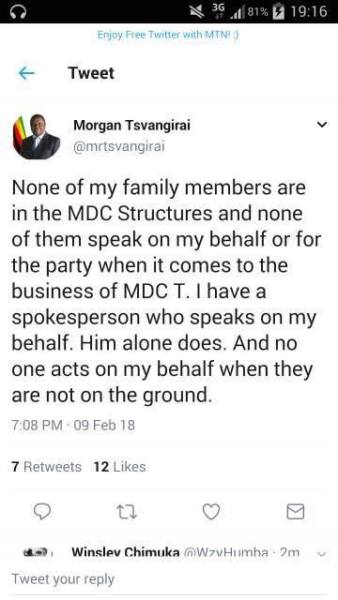 It is believed that Ms Macheka had captured Mr Tsvangirai in a manner reminiscent to former First Lady Mrs Grace Mugabe’s hold on then President Robert Mugabe. The Tsvangirai family, which is in South Africa, yesterday set the record straight, acknowledging that Eng Mudzuri was still the acting president.

In an interview with SABC, the family confirmed two meetings between Mr Mudzuri and Mr Tsvangirai in the past two days. They said Mr Tsvangirai intimated that all official communication with regards to party business and his health would come via his eldest son Edwin.

Said Edwin: “Yes they (Mr Tsvangirai and Eng Mudzuri) did engage yesterday and today as well. I am happy about the progress. We can see that there is an improvement. It’s not that great but I think its sound, its acceptable and we can see that he will improve in the future.”

Edwin’s wife Diana said since Mr Tsvangirai was admitted, he never got in touch with politicians. Her remarks put into question claims by Mr Tamborinyoka that he had contacted Mr Tsvangirai.

“What I need to categorically state is that as a family we have limited access particularly when it comes to politicians,” said Diana.

“So it’s unfortunate that there is information that he has been talking to people but I think collectively with everyone here we can say that he has not been seeing or speaking to anyone at the party. The only person he said he will communicate via is his son here my husband Edwin and anyone who has not spoken via him is also not stating factual information.”

One of Mr Tsvangirai’s sons Vincent said: “My message to the members of the public as a family we would like to thank everyone that’s keeping my father in prayers and I also want thank the Government for the assistance they are giving us in helping with medical bills and everything like that.

As you can understand with issues of cancer they can get quite expensive so we will definitely would like to thank them from the bottom of our hearts for their assistance. We pray to the public that you keep praying for us and I think for now we are in a good place and people’s prayers are really working.”

Mr Tsvangirai’s brother Collin said he was also happy with his improvement.

“Myself as a brother, I came here three weeks ago to see the health of my brother. I appreciate the way the doctors are treating my brother. He is doing well. He is responding to treatment but as you know something that has come up within the body sometimes it goes up sometimes it goes down.

But today when I saw him he was fine except that doctors are the ones who know the organs within somebody’s body. We cannot tell what they are but they are the people who can talk to us and its fine and we accept what they say.”

Mr Mudzuri said the brief that he had from Mr Tsvangirai was that he was still the acting opposition leader.

“There has been a bit of falsehoods that has been going around which has disturbed the operations of the party hence the president has asked me to come personally to share with me what is happening. People are claiming that they have been asked to act outside me but the president confirmed that he can only talk to the acting president only (and) no one else.

That is why I am here and I talked to him last night, this morning I left him going for the ex-ray. What we are looking at is the future of the country, people must be united, people must work together, people must respect authority as given by the president Richard Morgan Tsvangirai.”

To confirm his ambitions for the leadership position, Adv Chamisa yesterday tweeted saying: “In my capacity as the acting president of the people’s party of excellence. I’ve pressed the reset button as we set the party 4 election preparedness, policy articulation & dealing with all hygiene issues. I’ve just met with parly caucus & all the 12 provinces. We’re clear & focused!”