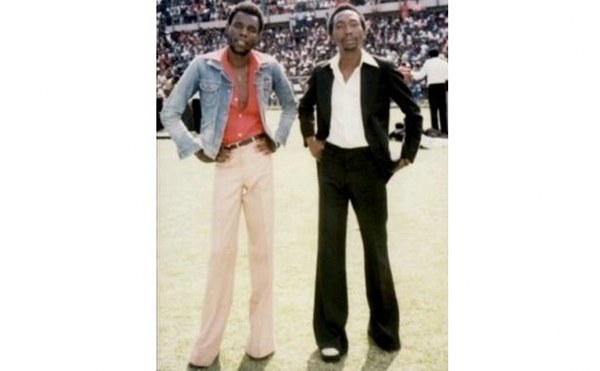 The perceived rift between veteran Chimurenga musician Thomas “Mukanya” Mapfumo and jazz legend Oliver Mtukudzi has lived for as long as many can recall, clouding the duo’s history of having played in the same band in the 1970s.

Mapfumo and Mtukudzi were part of a band called Wagon Wheels in the late 70s but the two parted ways and persued solo careers. This fuelled stories of how they are sworn enemies that can never share a stage.

But while their followers may still maintain a red line not to be crossed, the two are reportedly cosy around each other.

“It is just a myth and wrong perception to say that Mukanya does not want to share the stage or do collaborations. You know there are a lot of jokes that are circulating but that is not Thomas,” said Mukanya’s publicist Blessing Vava.

“Mukanya is willing to work with others and pass on the baton to the next generations of artists.”

Mapfumo, who lands in Harare a week before his show at Glamis Arena will be performing for the first time on home soil in the country since leaving for USA in 2004. The show slated for April 28 is dubbed the Welcome Back Big Bira. Mtukudzi is part of the supporting acts.

Speaking at the maiden press conference in the build up to the much-hyped concert on Friday, Vava said contrary to public belief, Mukanya and Tuku were friends and the Mamvemve hitmaker itinerary in the country would include visiting Tuku.

“Thomas will visit his friend Oliver Mtukudzi at Pakare Paye as a symbolic gesture to the people of Zimbabwe of a friendship that has stood the test of time,” Vava said.

“We actually had another booking to perform somewhere not in Zimbabwe. However, when we were informed about this historic show, we cancelled the whole programme so that we could be part of this,” said Wanyanya, adding that they were holding the event in high esteem.

“For us it is not about money, but it is a situation we considered important because Tuku wanted to be part of the concert.”

There is no doubt that being at the show is partaking in a great opportunity which any musician would not want to miss.

Certainly, not Mtukudzi who has just released an album needing marketing and may have found the perfect occasion to diplomatically prove why he has been labelled the ultimate godfather of local music in the absence of Mapfumo whom for long had been touted the best between the two.

Perhaps the only glimpse of friendship for those wishing cordial relations between the two could be the fact that the two are now at advanced ages and “beef”, if any, could be the least of their focuses.

Mapfumo is, according to his publicist, sitting on a yet to be released collaboration between the duo meaning they have capabilities of working together.

Other local musicians who are likely to partner Tuku include Gary Tight and Andy Muridzo.

Meanwhile, Tuku unveiled his latest 10-track album titled Hany’ga (Concern) to the press on Wednesday. Tuku said the album was all about peace and working together, adding that there was no need in competing with each other to try and prove who was better, as this triggers conflict.