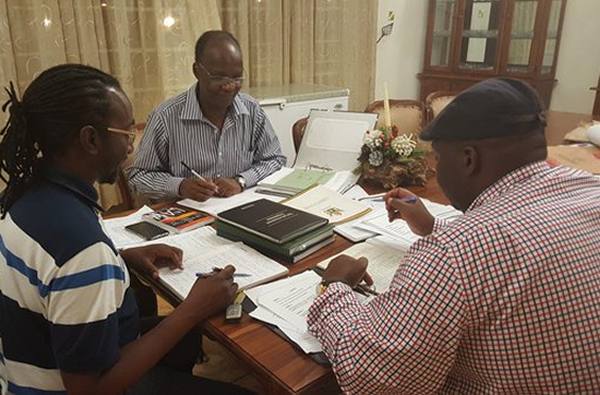 The trio are now living in self-imposed exile following the fall of former president Robert Mugabe — who resigned from power late last year on the back of a military intervention and a threatened impeachment process in Parliament.

Moyo and Zhuwao have been publicly and viciously attacking Mnangagwa’s government through social media and interviews with foreign media over the past few weeks.
On his part, Kasukuwere — who is said to be trying to smoke a peace pipe with Mnangagwa’s government — is being linked in some quarters to alleged cloak-and-dagger activities of the mooted National Patriotic Front (NPF), which is also courting opposition parties to take on Zanu PF and its leader in this year’s crucial national elections.

Kasukuwere, unlike Moyo and Zhuwao, has not been vocal in public since Mugabe fell — with much of what is attributed to him coming through other people claiming to speak for him.

Home Affairs minister Obert Mpofu told the Daily News at the weekend that as a result, the government was closely following the actions of the trio, as it was concerned with the G40s’ continuing attacks on the new administration.

“We are very concerned with what they are doing. Their accusations against the leaders of government are very worrying.

“Contrary to what they claim, no harm has come to their comrades who have remained in the country. We thus continue to follow their actions closely,” Mpofu said.

This comes as Moyo and Kasukuwere’s bank accounts have already been frozen, as authorities seek to get answers from them relating to their financial activities.

However, Mpofu said the government had no plans to seize the duo’s properties or any belonging to other G40-linked kingpins.

“I am not aware of any property that has been taken from them . . . If the situation changes, it will be up to the responsible authorities to start the legal processes (to do so),” the minister said while responding to allegations that the military had seized nine cars from Kasukuwere.

The Daily News was told yesterday that in order to seize property, the police usually needed to prove to a court “by a preponderance of the evidence” that the property was connected to, or likely to be used in criminal activities.

Mpofu insisted at the weekend that the government’s hands were “clean” and that if any army officials had ransacked the homes of the exiled former Zanu PF bigwigs, then the long arm of the law would catch up with those found culpable.

The curtain fell on Mugabe on November 21 last year when he resigned moments after Parliament had started proceedings to impeach him.

This followed a military intervention that was code-named Operation Restore Legacy, which saw the nonagenarian and his wife being placed under house arrest.

Several Cabinet ministers linked to the G40 faction, which had coalesced around Mugabe’s reckless wife Grace, were targeted in the operation which ended just before Christmas — with the soldiers only retreating to their barracks after five weeks of executing the operation.

Moyo is facing a slew of allegations relating to corruption — which include serious fraud, money laundering and criminal abuse of office charges, as well as claims that he benefited from Zimbabwe Manpower Development Fund (Zimdef) donations that involved the purchase of bicycles, which he donated to his Tsholotsho North constituency.

The Zimbabwe Anti-Corruption Commission (Zacc) alleges that the donations of the bicycles was not done above board.

The anti-graft body further claims that Moyo, his then deputy Godfrey Gandawa, and Zimdef chief executive Frederick Mandizvidza, were at the centre of multiple corrupt and fraudulent activities running into hundreds of thousands of dollars.

On his part, the former Tsholotsho North MP says he is not corrupt and instead, has been working hard to discredit the government by repeatedly questioning the legitimacy of Mnangagwa and his administration which has been accepted by Sadc, the African Union and key Western powers.

Moyo has also told the international media that his life is allegedly in danger, and that he has no intentions of coming back home until there is what he terms a “return of constitutional government”.

“The military specifically targeted my house and myself with a clear intention to cause harm and that is why I am not in the country, although I left legally.

“I am not at liberty to disclose my whereabouts because they have shown a very clear and determined intention to find me and harm me wherever I am,” Moyo said recently in an interview with the BBC.

Mugabe’s nephew, Zhuwao, has also since launched a weekly column which he uses to discredit and malign Mnangagwa and his government.

Last week he defiantly told the Daily News that he would soon be returning home — although there is little evidence so far that he will carry out this promise.

“I am coming back (home) before the end of the year,” Zhuwao declared then.

It has been reported that the G40 is allegedly bidding to bring together former vice president Joice Mujuru and the MDC, as part of its wider campaign to stop Mnangagwa from winning this year’s make-or-break elections — whose dates are yet to be announced.

The vanquished G40 was locked in a bitter war with Mnangagwa, whom it fought with the visible help of Mugabe and his wife — before the intervention of the military which overran the faction when it launched Operation Restore legacy on November 15 last year.

In the meantime, the disgruntled G40 stalwarts have since written to regional and continental bodies, the Southern African Development Community (Sadc) and the African Union (AU), appealing for their intervention to help Zimbabwe return to “constitutional rule”.

Mujuru, who now somehow enjoys the G40s’ support, recently held talks with Mugabe at his “Blue Roof” mansion in Harare — three years after she was sacked from both Zanu PF and government by the 94-year-old.

The NPP leader was ruthlessly cut loose by Mugabe in the run-up to Zanu PF’s 2014 congress, together with other then leading ruling party figures who included former Cabinet ministers Didymus Mutasa and Rugare Gumbo — on untested allegations of seeking to topple the power-addicted nonagenarian.

Mujuru’s meeting with Mugabe coincided with the announcement of the formation of the NPF, which is said to be driven by the exiled G40 kingpins.