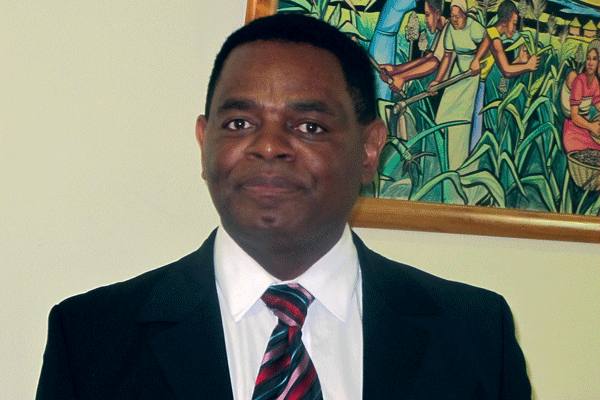 AS the leadership row threatening to tear the MDC-T apart, and for the third time continues unresolved, a visit to the ailing party leader Morgan Tsvangirai by South Africa based businessman Mutumwa Mawere throws some new light on the febrile drama.

The latest row is apparently over who should be acting MDC-T leader between the three vice presidents – Thokozani Khupe, Nelson Chamisa and Elias Mudzuri. More broadly however, is a succession fight that mirrors a similarly bitter ruckus in the ruling Zanu PF party which was only resolved by a military coup.

Below is a Mawere’s account of his visit to Tsvangirai at the South Africa hospital where the former premier is admitted and receiving treatment for colon cancer. Mawere allowed NewZimbabew to publish his post.

FOR anyone in doubt that Tsvangirai met with Elias Mudzuri and that, in truth and fact, he signed the letter confirming Mudzuri as the Acting President of the MDC-T party, this picture is one of many I have seen with my eyes that should put any debate at rest. 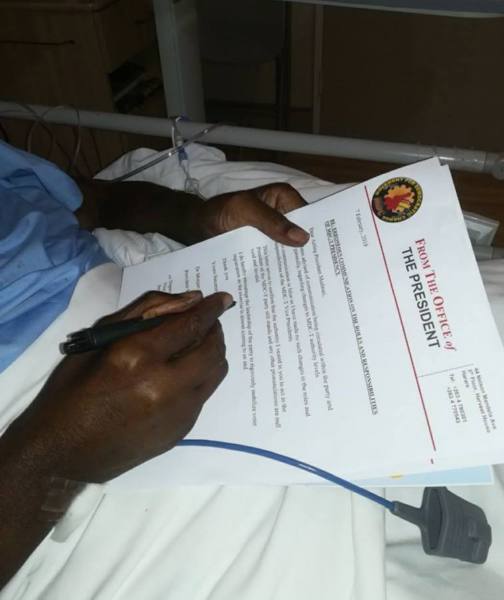 Some may question my interest and legitimacy in meddling in this matter that in any event should never be a subject of any dispute especially when the facts stubbornly stand on their own.

I got a call yesterday (Tuesday) from a close Tsvangirai family member. Some may not know that I am related to Tsvangirai. I heeded the call and visited the hospital yesterday. I, like many, doubted Mudzuri’s version that he met with Tsvangirai on the 8th and 9th of February. It is common cause that the visit by Mudzuri, Thokozani Khupe and Douglas Mwonzora appears to be at the core of the dispute between the office bearers in the party.

What are the facts?

2. On 2 Feb 2018, Tsvangirai’s wife unknown to the members of the Tsvangirai family attending to him in SA disappeared for the day only to surface at the hospital at 20:13 in the evening. Unknown to her, a member of the Tsvangirai family had seen her in Zimbabwe driving to the airport presumably to catch a flight back to SA. She apparently had told Tsvangirai that she was not feeling well and the message was transmitted by Elizabeth’s government-assigned assistant.

3. On 7 Feb 2018, the issue regarding the disputed appointment of Hon Chamisa pursuant to a letter purportedly authored and signed by Tsvangirai and allegedly transmitted through his spokesman came to the fore. At issue was whether Mudzuri was fired for his participation at the Cape Town meeting and in his place, Hon Chamisa was appointed as the Acting President. The facts established confirm that Luke at all material times did not have any direct or indirect contact with Tsvangirai who apparently stopped using cell-phones some months ago. It is not in dispute that Luke Tamborinyoka (Tsvangirai’s spokesman) is living in Zimbabwe and there is no suggestion that he visited SA on 7 Feb 2018. The family believes that Luke bears the onus to prove how he got the letter that he says was signed by Tsvangirai. At the present moment, it would appear that no facts exist to support the version asserted by Luke. What emerged during my visit was that Tsvangirai tried in vain to reach Luke before the latter’s press statement sticking to a version that in truth and fact, Hon. Chamisa was the de jure Acting President.

4. On 8 Feb, Mudzuri visited Tsvangirai and they met in the evening at the hospital. This was followed by another meeting on 9 Feb before Mudzuri’s SABC interview. As you can see in the attached pic, it is Tsvangirai’s hands holding the letter that is already in the public domain confirming Mudzuri’s version. Common sense would dictate that if Luke and Hon. Chamisa’s version is true, then surely it would be absurd that Tsvangirai appointed Hon. Chamisa to be the Acting President on 7 February only to repudiate the appointment on the following day.

It is clear that the facts should be allowed to guide us. Having satisfied myself that there is only one truth, I then interviewed Collins so that the world may know where fact begins and ends and where self-serving fiction begins and ends.

It may be the case that within the Tsvangirai family, there could be a person trying to play mischief. Who could this person and what could possibly be the driving motive. It is not in dispute that Tsvangirai is not well. Some of us would recall that the reasons succession played a big part in the events leading to the exit of Mugabe were the twin issues of advanced age and health.

What is not in dispute that the political legacy of Tsvangirai is heavily contested. There are people who have already written his obituary before the event. There are some who are concerned that if Tsvangirai dies before the succession issue is settled, they may be played out of the game.

It is really sad to see events unfold in this manner. What lessons do we all learn from this?