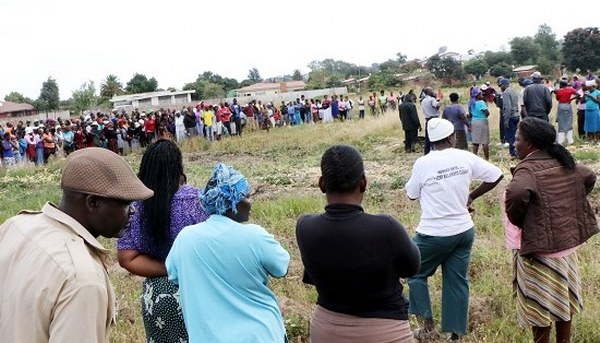 AN unidentified woman was found dead, stripped half na_ked with a boulder, used to crack her skull, placed on top of her head in a bushy area in Bulawayo’s Pumula North suburb.

Passersby stumbled upon the body of the woman opposite a Zesa sub-station, near Pumula High School on Tuesday.

Residents told Chronicle that the woman was half na_ked, with her lime green underwear, black skin tights and grey takkies placed a few metres from where she was found.

They said the boulder was placed on her head, as she lay face down, covering her cracked skull and while a sjambok was also left next to the body.

“Her body showed she was thoroughly beaten up with a sjambok before her head was crushed with the huge rock which was then placed on top of her. She can’t be from around here because if she was, someone would have identified her,” said an elderly resident who declined to identify himself.

“We are investigating a case of murder where a half naked woman was found with her under garments a few metres away from her. The woman is suspected to be aged between 30-35 years old. I can’t say much on the matter as this may jeopardise police investigations,” said Insp Simango.

She appealed to members of the public who may have a missing relative to come forward and identify the body.

“Police are also appealing to those who may have information that may lead to the arrest of the suspect to contact their nearest police station.”

The body was taken to the United Bulawayo Hospitals (UBH) for a post-mortem.

Meanwhile, police in Lupane, Matabeleland North, are appealing to members of the public who may have a missing male relative to come forward and identify a body discovered in November last year at the 166km peg along Bulawayo-Victoria Falls Road near Lupane State University.

The body is being held at St Luke’s Mission Hospital Mortuary.

Officer Commanding Police in Lupane District, Chief Superintendent Johannes Govo said the deceased had no identity particulars on him.

“The deceased is estimated to be between the ages of 30-40 and approximately 1,7 metres tall. The male adult is dark in complexion with short hair. He wore a light blue short sleeved shirt, grey trousers and a pair of cream farmer shoes.

“We are appealing to members of the public who have a missing relative or may know this man to come forward to identify the body,” he said.

When the body was discovered in November, police suspected that he had been murdered.

“A cyclist discovered the half naked body which was covered by tree shrubs a few meters off the main road. A heavy stench drew a passerby’ s attention and he went closer to discover the body whose pair of trousers was open and lowered, exposing his privates,” said Chief Supt Govo.

He urged members of the public to always carry their identity particulars for easy identification.

Chief Supt Govo appealed to relatives of the deceased or anyone who knows the deceased to contact the investigating officer, Sergeant Dube on 0717 177 784 or the Officer in Charge Lupane Traffic, Inspector Tawasika on 0389-290 or cell 0772 700 992.