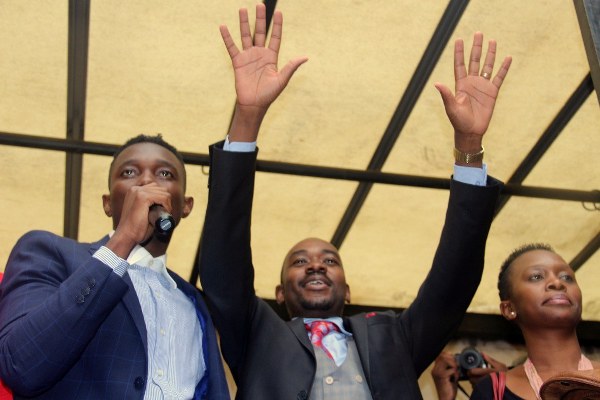 Richard Tsvangirai, youngest son to the late Morgan Tsvangirai, has all but endorsed MDC-T acting president Nelson Chamisa as the successor to his father, amid family and party squabbles that have engulfed the funeral of the veteran politician.

Richard, who made an appearance at Harvest House, the MDCT’s headquarters, said Chamisa was the chosen one and now carries the responsibility of uniting a party founded by his father in 1999.

“This man (Chamisa) is a true leader, he is the one who walked a great distance with my father and he knows what is needed for this party to move on.

“So lets rally behind him and give him maximum support ahead of the elections. My father would be very proud to be replaced by such a man with great qualities,” said Richard.

This comes after the mother to the late Tsvangirai, threatened to commit suicide if Chamisa and Tsvangirai’s widow, Elizabeth attend the burial of the former trade unionist.

She only calmed down after close relatives intervened.

Chamisa is believed to be at loggerheads with the Tsvangirai family over the fallen opposition leader’s succession.

Reports suggest the family is rooting for Engineer Elias Mudzuri to take over the MDC-T leadership while some senior party leaders are for Chamisa.

The family believes Elizabeth is in the Chamisa camp.

Richard Tsvangirai’s remarks, however, will fuel the already sparks flying within the opposition movement as power struggles have dived the party.

Chamisa has already been appointed the acting president of the MDC-T after the National Executive Committee met hours after the demise of Tsvangirai and agreed to have the young politician take over the reigns , albeit on an acting basis, for 12 months.

The move has not gone well with protagonists in the succession battle , who include Vice President Thokozani Khupe and Elias Mudzuri, who are seen as vying for the top post.

The two have opposed the appointed of Chamisa on February 15 as they cite irregularities regarding his appointment.

Meanwhile, MDC-T Secretary General, Douglas Mwonzora, told the mourning supporters that the party is united and shoild rally behind the acting president.