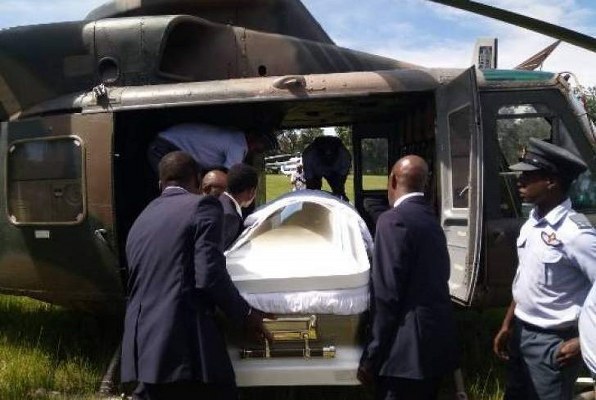 FORMER Prime Minister Morgan Tsvangirai’s body arrived Monday at his rural home of Humanikwa Village in Buhera district of Manicaland ahead of burial Tuesday aboard an Airforce of Zimbabwe chopper.

Tsvangirai died in South Africa last Wednesday after a two-year battle with cancer of the colon.

He was granted a State assisted funeral with President Emmerson Mnangagwa promising government will take care of all costs.

However, as family and political tensions continue to boil, Tsvangirai’s widow Elizabeth Macheka did not accompany her husband’s body home.

Instead it was the late MDC-T leader’s mother and party deputy national chairman Morgan Komichi who were with the veteran opposition leader on his last journey home.

“It was a decision taken by the party that Mbuya Lidya Tsvangirai and myself accompany the body. She (Elizabeth) will follow by road,” said Komichi.

On arrival from South Africa with Tsvangirai’s body, Mbuya Tsvangirai threatened to commit suicide if one of the late MDC-T leader’s deputies, Nelson Chamisa, and Elizabeth were allowed to attend the funeral.

“Tell your uncles that I do not want to see Elizabeth or Chamisa at the funeral. I do not want to hear Chamisa’s speech if they come I will commit suicide,” the grieving woman said triggering ragging internal debate within the MDC-T and across social media.

Chamisa presided over the memorial service in Harare Monday while Mbuya Tsvangirai remained stuck in the hearse carrying her son’s body.