MDC-T leader Mr Morgan Tsvangirai’s widow, Ms Elizabeth Macheka, did not accompany her husband’s body to Buhera for burial as pressure mounted on her from the Tsvangirai family that she should not attend the funeral.

Mr Tsvangirai’s body arrived at Makanda Primary School around 15:50 hours.
It was accompanied by his mother Mbuya Lydia Chibwe Tsvangirai, his brother Collin and son Edwin, among other close relatives aboard two helicopters.

MDC-T co-vice presidents Messrs Nelson Chamisa and Elias Mudzuri, who are embroiled in a tussle to lead the party, were not in the two helicopters provided by the Zimbabwe Defence Forces that brought Mr Tsvangirai’s body. 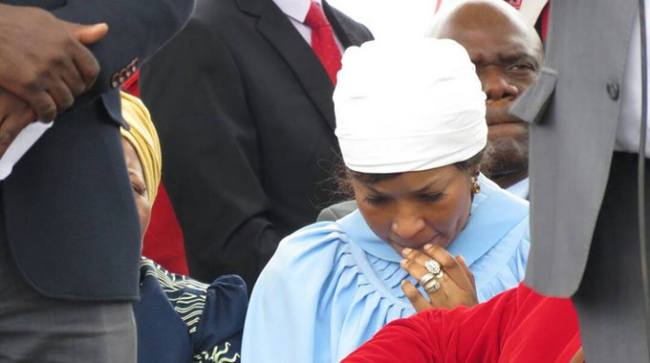 Instead, MDC-T deputy national chairperson Mr Morgan Komichi and another standing committee member Ms Paurina Mpariwa were aboard a second aircraft while Mbuya Tsvangirai travelled with the helicopter carrying the deceased.

Mbuya Tsvangirai had vowed that she would commit suicide if Ms Macheka and Mr Chamisa attended the funeral.

Sources said Ms Macheka was supposed to use a second helicopter separate from that which had Mbuya Tsvangirai to avoid confrontations.

“But from how events unfold, the widow appears to have bowed to pressure because that helicopter had Edwin and his wife. So she chose to stay away,” said the source.

Collin declined to comment when The Herald sought his views.
In an interview at the funeral, Mr Komichi said Ms Macheka made a personal decision not to accompany Mr Tsvangirai’s body.

“We spoke to her, she actually accompanied the body to One Commando, but made her decision not to travel with the body. It was her personal decision. We had actually reserved a seat for her. She told us that she would prefer to travel by road and that is what she is doing. She is coming,” said Mr Komichi.

Efforts to get a comment from Ms Macheka were fruitless yesterday. Mr Komichi could not be drawn into commenting on the nature of the differences between Mbuya Tsvangirai on one hand, and Ms Macheka and Mr Chamisa.

He said discussions had been held to narrow the differences.
“Differences arise and we talk over them and try to resolve. We also need to respect her views. Remember she is mourning. She lost a son. We need not to lose sight of that,” said Mr Komichi.

Commenting on the differences within the MDC-T over Mr Tsvangirai’s successor, Mr Komichi said he had approached party elders and some clergymen to try to resolve the fights.

“We have invited elders to resolve them. I have also engaged Bishops, like Bishop (Sebastine) Bakare and many others to really come forward,” he said.

He said the party leadership including the vice presidents were expected to travel to Buhera today for burial.

Other notable people who were aboard the helicopters were ZDF national chaplain Colonel Joseph Nyakudya.