A picture of former Zimbabwean president Robert Mugabe together with his wife Grace and the African Union Commission Chairperson Moussa Faki has gone viral on social media.

Faki was in Zimbabwe on Monday where he first met with President Emmerson Mnangagwa, who according to the state-owned Herald newspaper “apprised him of measures being taken by government to ensure free and fair elections”.

Faki later posted pictures of him with Mnangagwa and another one with Mugabe and his wife. He wrote: “In #Harare for my first visit following the peaceful transition of power. #Zimbabwe is indeed open for business! Met with President @edmnangagwa and it was an honour to also pay a visit to former President Robert Mugabe. With thanks to foreign minister SB Moyo.”Details of Faki’s meeting with the Mugabes could not be ascertained.

While Grace has not been seen in public since the ouster of her husband from power in November, Mugabe himself was last seen when he visited a Singapore hospital during a trip to the city-state for a medical check-up.

It was the first time the 93-year old was seen in public since he was forced to resign after a military takeover brought a sudden end to his authoritarian 37-year resign.

The nonagenarian was seen at the time leaving a lift in Gleneagles Hospital in downtown Singapore, wearing a white shirt and black trousers, and accompanied by eight people.

He walked quickly out of the building before he and his party were driven off in two cars.

The latest picture elicited interest on social media, with some Zimbabweans saying that there was “something sad” about it (the picture). 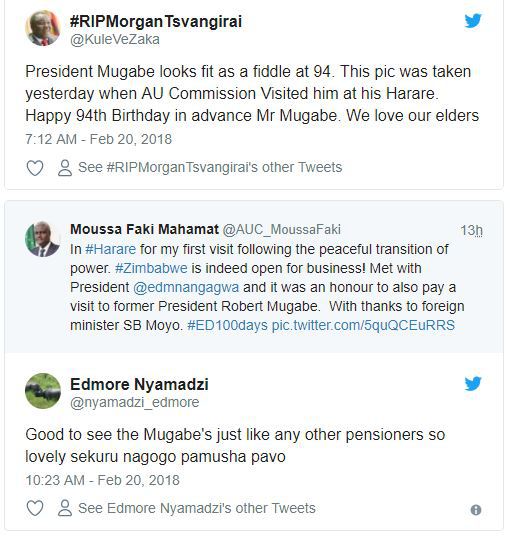 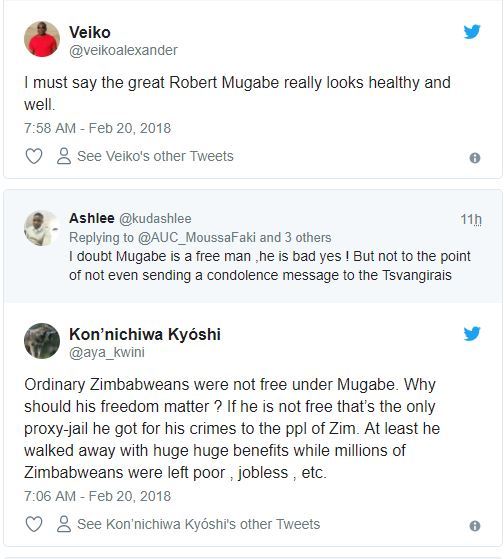