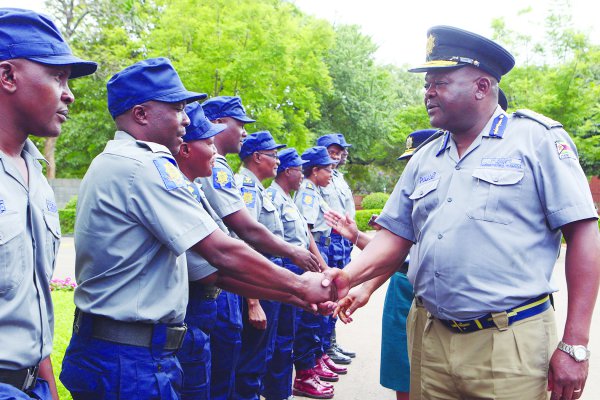 He is a career cop who walked the beat over the past 23 years before assuming the post of police commissioner-general.

He graduated as a patrol officer in October 1982, and is a police veteran who rose through the ranks and held a number of leadership posts.

Godwin Matanga’s background in law enforcement strategy and theory is impressive, he holds several professional qualifications in Active Field Artillery, Management and Financial Management, and he is a man who has navigated his way through a large and politically-charged department in the country.

However, nothing he has faced in his 23 years of service as a policeman may equal the challenge he faces here as head of the 50 000-member Zimbabwe Republic Police (ZRP).

Matanga faces a mammoth task of rehabilitating the image of the force among the public who perceive it as a bastion of corruption.

Morale within the department is said to be at an all-time low stemming from the dismantling of extravagant roadblocks that had become avenues for cops to extort motorists. Badly paid and ill-equipped, patrol cops had long supplemented their pay with small bribes from motorists and petty criminals.

But following the new Executive’s decision to retire long-serving police chief, Augustine Chihuri, there has been a great change in the police force.

Chihuri’s 24-year-long reign as commissioner-general came to a crashing halt in December, when President Emmerson Mnangagwa sent him on leave pending retirement amid thunderous calls for his head from a cross-section of Zimbabweans.

Matanga, who replaced him first in an acting capacity, has now been made substantive police boss.

This comes as public confidence in the law enforcement agency had hit its lowest ebb owing to pervasive corruption, partisan policing and ubiquitous roadblocks that had become avenues for motorists’ shakedowns.

Motorists were also fretting over the use of spikes, which saw several people dying after being caught up in movie-style chases between automobilists and the police.

The ZRP has also been accused of heavy-handedness in dealing with dissent and being at the beck and call of Zanu PF in suppressing opposing voices.

This last week, Matanga found himself in the midst of a row between vendor representative unions who have vowed that informal traders would defy a government decree to leave street pavements across Zimbabwe’s towns and cities, defying an edict to forcibly remove them with the military’s help.

The attempt to drive the vendors and public minibuses from the Harare CBD sparked deadly clashes, with the police force shooting two people dead and injuring four others in the capital on Thursday.

City authorities on Thursday enforced Local Government minister July Moyo’s directive for vendors, who have mushroomed across Zimbabwe’s urban centres and are estimated to be around 6 million, to leave the streets for designated sites and for minibuses not to enter the CBD.

The minister had roped in Vice President Constantino Chiwenga, a retired general who engineered the ouster of (Robert) Mugabe, “to seek his assistance so that security agencies can work with the municipalities.”

After the unfortunate killings, the ban was reversed within hours by the government, but police had already been deployed to implement it.

“I wish to announce the death of two people in a very unfortunate and regrettable incident on February 22,” Matanga told journalists at a press conference at Police General Headquarters (PGHQ) last Friday.

“As the (unbanning) directive was given, the police and other security agencies were still in the middle of the operation enforcing the ban and unaware of the cancellation.

Matanga apologised. He described what transpired as a “very unfortunate and regrettable incident”.

But critics, including pressure groups and opposition political parties, poured scorn on the heavy-handed police crackdown, saying it makes a mockery of Matanga’s pledge to uphold the police’s constitutional mandate and guaranteeing the safety and security of both citizens and visitors alike.

Furious vendors said during the few days Matanga has been in office, they have not felt much difference to the old reign as they claim violence and unlawful confiscation of goods by police officers still persists. “As vendors so far we have noted with great concern the conduct of police officers assaulting people without any account being made for such action,” vendors’ leader Sten Zvorwadza said.

“This leaves a lot to be desired because a professional police force ought to desist from engaging in violence in public places.”

The Zimbabwe Lawyers for Human Rights (ZLHR) said it was “saddened by the unbecoming and reprehensible conduct” of the ZRP.

“ZLHR considers the ZRP members’ conduct and actions to be in violation of Section 208 of the Constitution, which calls on members of the security services to exercise their functions in a way that does not violate the fundamental rights and freedoms of any person.”

Witnesses said members of the public besieged Harare Central Police Station and reportedly threw stones and set alight some vehicles as ZRP members reacted by firing teargas canisters to disperse members of the public, who were protesting against the death of people in Harare.

The rights lawyers said: “While members of the public may have felt aggrieved by the ZRP’s actions, their conduct of mob justice does not justify their response and doesn’t entitle them to take the law into their hands.”

“Those ZRP members involved in the shooting of people and injuring some people must be appropriately disciplined or prosecuted, regardless of rank and be held to account to prevent recurrence,” the statement said.

Leading Harare layer Gift Mtisi — who has in the past had constant brushes with the police over gross rights abuse – said Matanga “faces a huge task and we wish him all the best.”

He said “the ZRP needs to be overhauled in terms of its culture, work ethic, and staff to enable it to achieve its vision of maintaining law and order, protect and secure the lives and property of the people and to institute dynamic policing practices that engender effective prevention, investigation and detection of crime”.