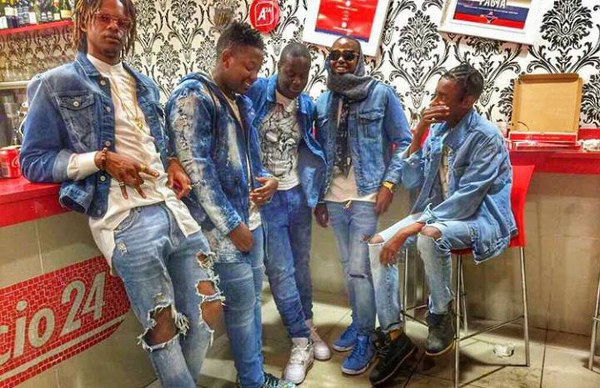 Former president Robert Mugabe’s son Tinotenda Robert Junior, who has traded the basketball court to join the lucrative fashion industry, says his parents do not want him to have it easy in his new line of business and that he has to learn all the ropes within the industry.

The 26-year-old who is currently based in South Africa, told a South African radio station Massiv Metro on the Thembi Takeover Show hosted by Thembi Seete that fashion design was his passion, inspired by his mother, Grace.

Tinotenda as he referred to himself throughout the interview, launched clothes from his line in December although he had hinted on it in November, just around the time his father was being kicked out of office.

The clothes label dubbed xGx is a high end label, which so far includes T-shirts and tracksuit like gear for both male and female.

Tinotenda launched the line with his business partner Salem.

“I ended up thinking I don’t want to play basketball forever, I want to create. And with my architecture background, fashion design is easy for me. So when I told my parents they said go on let’s see.

“I have always wanted to create, design and then in December I finally said this is it. Most of my influence, I was inspired by my mother. My mom is my inspiration.”

He told the presenter he has not yet been able to dress his parents but was hoping to do so.

Robert Junior who has always been a “headache” for his parents, together with his younger brother Chatunga was hopeful that his parents were proud of the way he was setting up his business.

“I hope they are proud of me, I think they are,” he said.

“The name (Mugabe) comes with a lot of expectations. There was a lot of pressure when my father used to be the president, anything you did would be criticised. They still try though, let them keep trying.

“When I was in Dubai it taught me to just do it, show people and you will get to where you want to get to.”

He described his clothing line as a high end with a mixture of African flavour and said he was happy with the way it was being received in Zimbabwe.

“I am from kwaZvimba I want to bring that flavour. We strive for perfection for our clothes. This is what God put us on earth to do.

“People in Zimbabwe who want the clothes can get to order on WhatsApp, we will be launching an online store.”

Robert Junior recently expanded his fashion line xGx to include a version of track suits which seem to have received a lot of interest among women.

According to Robert, the products which cost between $165 and $180 for a set have been well received as some of the pieces got sold.

While the operation is based in South Africa, Robert responded to questions on his Facebook saying they delivered worldwide and took all forms of payment used in Zimbabwe.

Robert Junior promised to fulfil both wishes saying: “tenga uone! I will deliver ndirini (buy and see and see I will personally deliver.”

It seems fashion runs in their blood. His mother is a designer of sorts.

The former first lady designed the Zanu PF fabric which was launched at the party’s annual conference in Masvingo last year.

The former first lady, who earned the nickname “Gucci Grace” because of her expensive fashion tastes, has always prided herself as a designer and fashionista, with her husband bragging that she even makes her own clothes.

In a People of the South interview with South African Dali Tambo, Mugabe refuted claims that Grace was a shopaholic.

“She doesn’t do that kind of shopping; she will buy fabrics and have them sown.

“She designs them herself. You can see they are quite decorated, she wants them very colourful,” Mugabe told Tambo in the interview.