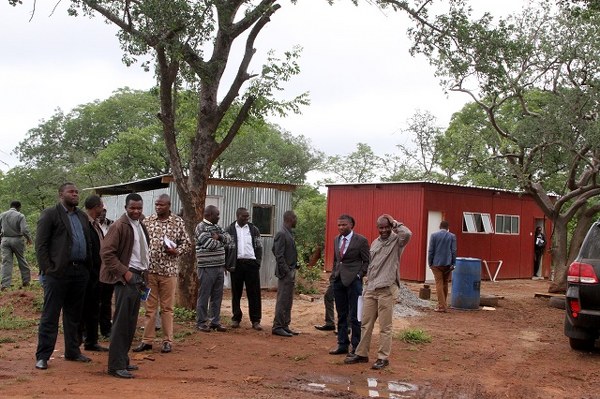 THE Parliamentary Portfolio Committee on Mines and Energy has expressed disappointment that no work has been done at the site of the proposed Gwanda solar power plant despite Intratek having been paid $5 million for the project.

This emerged during a tour of the project site by MPs in the company of Zimbabwe Power Company (ZPC) executives, officials from Government departments such the Environmental Management Agency (EMA) and Gwanda Municipality.

Intratek, a company owned by flamboyant Harare businessman, Mr Wicknell Chivayo was awarded the tender in 2013 and paid $5 million by ZPC to build the 100 megawatt Gwanda solar power plant

After receiving the money without a bank guarantee, no meaningful development has taken place at the site.

Erected at the site are two cabins, toilets with no ablution facilities and a perimeter fence which does not cover the whole site.

The road network at the site is also poor. It also emerged that the proposed plant falls under state land and Intratek has failed to pay the required money for leasing it.

In an interview after the tour, committee chairperson who is also Norton MP, Mr Temba Mliswa said his committee was disappointed that money was paid to Intratek but work done on the site is not commensurate with cash paid upfront.

“Clearly the money that was paid to Intratek does not tally with what is on the ground. We just saw toilets with no ablution facilities and sewer, fence which is not done all the way. We need to find out from them why they have not completed the work,” said Mr Mliswa.

“ZPC were also very clear that they were not happy with work done so far and it is important for us to understand that this emanates from the oral evidence from Mr Chivayo when he came before us. ZPC also gave evidence to the committee.”

Mr Mliswa said his committee had picked a number of anomalies on the Gwanda project.
Zimbabwe Power Company acting managing director Joshua Chirikutsi brief the mines and energy Parliamentary portfolio about what they intended to construct and what is already achieved on the Gwanda solar project in Gwanda yesterday.

Zimbabwe Power Company acting managing director Joshua Chirikutsi brief the mines and energy Parliamentary portfolio about what they intended to construct and what is already achieved on the Gwanda solar project in Gwanda yesterday.

“There are so many anomalies that include lack of expertise. The land tenure is also not there so how can you talk about owning the project when you don’t even have the right documentation of owning the land?,” he said.

“They (ZPC) and the Procurement Regulatory Authority of Zimbabwe (formerly State Procurement Board) who awarded the tender are appearing before the committee on the 14th of March and after that we will submit our findings.

It emerged during a briefing before the tour yesterday that the Ministry of Lands, Agriculture and Rural Resettlement withdrew Intratek’s application to lease the land due to the contractor’s failure to pay an annual subscription fee of $15 000.

Mr Mliswa said the subscription fee was, however, paid by ZPC and the power utility has applied to lease the land.

“There is no way such a project can go ahead without a lease. So we are now asking ourselves how in the first place he (Mr Chivayo) was given this project when he did not have proper land documentation defining the tenure.

“We also have the (EIA) Environmental Impact Assessment from EMA coming in, why was it issued a year later?” queried Mr Mliswa.

Responding to questions from the committee, ZPC acting managing director Mr Josh Chirikutsi admitted that his organisation had not done due diligence to ascertain if Intratek had proper documentation for the land. “Basically, what we are saying is getting land for solar project, l was trying to say it’s not a big challenge for us, Government will assist us to get land. If Intratek were to chase us from here, we would find other land,” he said.

The committee argued that ZPC was supposed to secure its documentation first before starting the project.

The committee has previously grilled Mr Chivayo over the manner in which he won the tender for the project in 2013. Mr Chivayo has also admitted that he was paid by the power utility without a bank guarantee following the intervention of former Minister of Energy and Power Development Dr Samuel Undenge.

The suspended ZPC managing director Noah Gwariro had refused to pay him the money without the guarantee.