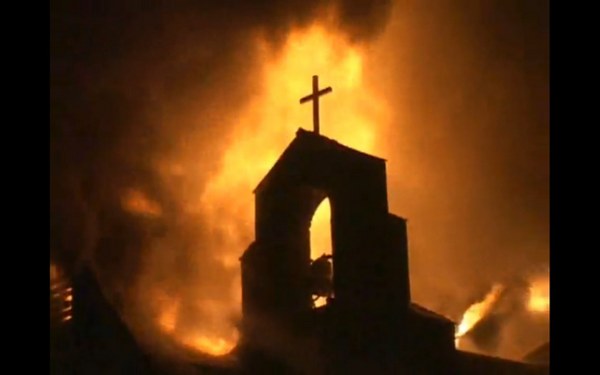 ANGRY youths torched a church in Anambra State in southern Nigeria after a man married his sister, claiming that God had told him to do so.

According to Punch, Chiadikobi Ezeibekwe is a maths teacher at a secondary school in the village of Agba. Last Sunday, he and his 17-year-old sister were married in the local Dwelling Fullness of God church.

The wedding was conducted by Ezeibekwe’s older brother, Chijioke Ezeibekwe, a priest at this church.

Ezeibekwe told Punch that he had a revelation where God told him to marry his sister. He also quoted Biblical passages that say siblings can marry each other.

Ezeibekwe is quoted as saying: “One advantage of doing this is that it discourages divorce. It also retains family values and norms.

He added that he did not pay anyone lobola for his sister’s hand in marriage.

But many in their family and community are furious, and youth’s vented their anger the day after the wedding by torching the Dwelling Fullness of God church.

The traditional prime minister of Ekwulobia, Gabriel Ezeukwu is quoted as saying: “Agba village youths, who saw the marriage as an abomination, set ablaze the church where the wedding took place.

“I restrained them from further action against the man and his family. If it were in the past, the entire family would be burnt down because this is a grave abomination and sin.”

The eldest son of the Ezeibekwe family, Emeka, is also livid.

“It’s over my dead body that they will call themselves husband and wife. It can’t happen,” he said.