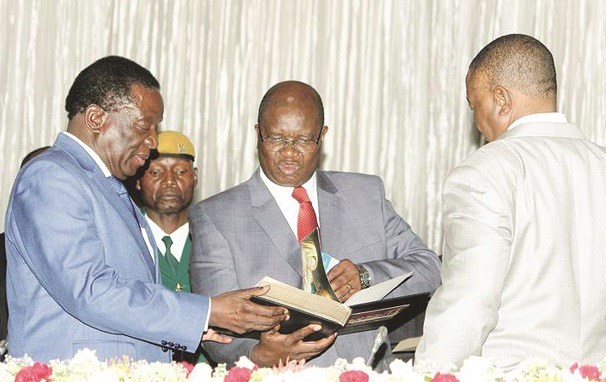 Churches yesterday endorsed the new dispensation led by President Mnangagwa, saying Zimbabwe is not a militarised State, as key institutions are not manned by serving military personnel.

The religious sects also pledged to rally behind President Mnangagwa in the forthcoming harmonised elections, saying he was capable of transforming Zimbabwe into a prosperous nation.
The churches made the endorsement during an interactive meeting with President Mnangagwa in Harare yesterday which they also used to air their challenges.

One of the challenges the church leaders highlighted was that some of their land was unceremoniously taken away by powerful figures during the previous Government led by former President Robert Mugabe.

“The church has been a development partner of the State in the building of schools, hospitals and businesses,” he said. “We believe that considering offering land to the church will have far reaching developments.

“Your Excellency, we want to remind you that some churches were dispossessed of their land and they are unhappy about that. We appeal that you help them recover it.”

“We should now tell our people the person who is ready, who is mature (to rule), who suffered with his people for a long time to the extent that he almost lost his life,” he said.

“He (President Mnangagwa) escaped death several times. We will be with you and advising our followers on the decision to make. Our people have suffered enough and they do not want to suffer again. We are not politicians, but we guide people.”

He added: “We have been applauded wherever we go over the peaceful transition and many ask how we did it. Do not be afraid, President, we are with you. Some people say we are being ruled by soldiers, which is false.

“We are being led by mature people who came from the war. Those who are still in the army are not here. What is left is for us to go and tell our people on the direction to follow.”

Bishop Mukonowengwe said they were fully behind the new dispensation.

“The politics of our nation had at some stage reached an intractable level where politicians were superintending over a fast deteriorating situation and economic meltdown,” he said.

“We observe that people had borne the brunt of harsh economic and social conditions with no recourse in sight, hence we welcome the advent of the new dispensation that has brought relief to an oppressed people who now have an opportunity to expect a better future.

“Past engagements have failed to bear fruit and we are happy that since you became President you pronounced policy that resonates with our desires of ending corruption, building a new State and prosperous economy and allowing of various freedoms that befit a people who fought a war to free themselves from colonial bondage.”

Council of Apostolic Churches representative Bishop Clement Chisango said they wanted to participate in the formulation of laws.

“We want to be part of Parliament so that we will not blame anyone in the future,” he said. “We will walk and work with you, Mr President.”

Speaking for the Zimbabwe Council of Pentecostal Churches, Dr Farai Katsande, said the new political administration should give an ear to churches.

“People engagement has not been taken seriously, a good example is on the change of the education curriculum,” he said. “We engaged the parliamentary portfolio committee on education expressing our concerns.

“The then Minister affirmed that he had consulted churches, yet all the umbrella bodies were never consulted. We believe that good leadership has the poor and needy at heart and when we partner we should be able to answer the question of how we can raise the bar of poor people to eliminate the divide within society.”

Apostolic Council of Churches leader Bishop Johannes Ndanga said some churches were given land for free and the same should be extended to indigenous churches.

Former Confederation of Zimbabwe Industries president Mr Callisto Jokonya said: “We are now looking up to you. You seem to do business better than us.

Your team is doing well. We are ready to ensure that the companies that had closed down are revived.”

Chairperson of the National Peace and Reconciliation Commission Justice Selo Nare, who also attended the event, said the Commission will work with churches to reconcile Zimbabweans.

President Mnangagwa promised to look into the grievances raised by the church leaders.

These included restoration of a National Day of Prayer, having a Minister of Religion and the restoration of the land that churches lost to powerful figures during the previous administration.

“We in Government would want to reciprocate to these relations,” he said.

“We are glad that you support the Government of the day. You said some churches were given free land and you need the same treatment. I have no doubt that my team would not be averse to give land to churches freely.”