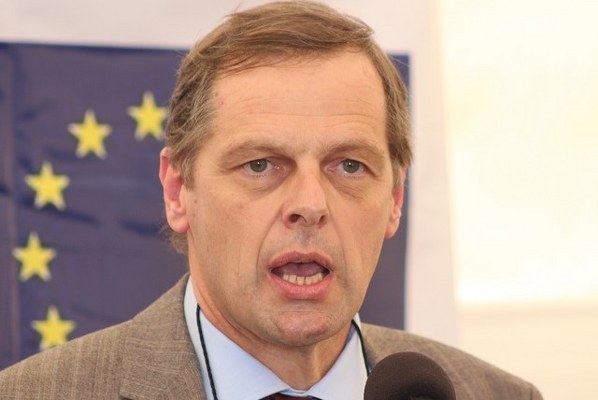 EUROPEAN Union Ambassador to Zimbabwe Mr Philippe Van Damme has bemoaned the intra party violence within the opposition MDC-T saying the party was losing credibility as a political movement.

Violence erupted at the MDC-T Bulawayo offices over the weekend as supporters of the party’s president Nelson Chamisa allegedly targeted a rival faction led by Dr Thokozani Khupe.

The MDC-T has been thrown into turmoil following the death of its leader Mr Morgan Tsvangirai last month.

The party’s national council has since confirmed Mr Chamisa as the party’s leader and presidential candidate in the forthcoming polls while Dr Khupe argues that constitutionally, she is the opposition party’s acting leader pending Congress.

Speaking to journalists on the sidelines of a civil society meeting in Gweru yesterday, Ambassador Van Damme said the violence being witnessed in the MDC-T has resulted in the party losing credibility as a political movement.

“Political violence has to be condemned in all circumstances, loudly, clearly and without any reservations. Political violence is totally unacceptable in the democratic debate. If it relates to intra party as we have indeed seen over the last couple of weeks, this also penalises the party’s concerns and credibility so they have to work on that,” he said.

Ambassador Van Damme challenged MDC-T leaders to address the violence as a matter of urgency.

“They have a challenge and they have to address that challenge. We hope this will not degenerate further and see also inter-party violence which will have an impact on how elections will be viewed,” he added.

President Mnangagwa has pledged to ensure that the forthcoming general elections will be free, fair and credible.

Speaking during an interactive meeting with heads of church denominations in Harare on Monday, President Mnangagwa urged political parties to shun violence ahead of harmonised elections this year saying those with better ideas will win the polls.