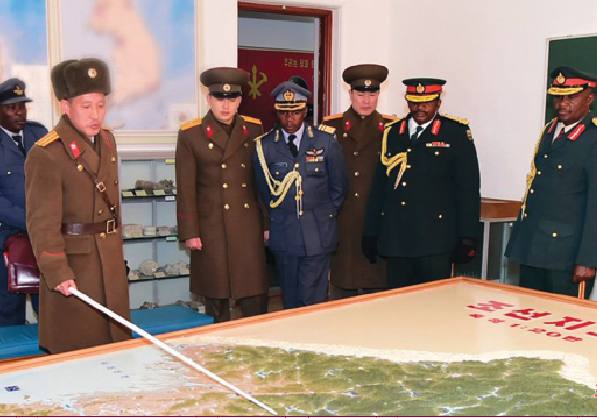 THE United Nations Security Council (UNSC) and the United States are closely watching the Zimbabwean government’s relations with North Korea after Harare sent a military delegation to the secretive Asian state last month.

North Korea is under a comprehensive and open-ended UN arms embargo that prohibits the export of weapons to and import of weapons from the country. Military co-operation with Pyongyang is strictly prohibited.

According to information obtained from Rodang Sinmun, a North Korean newspaper that is the official voice of the central committee of the Workers’ Party of Korea, the Zimbabwe military delegation led by Commander of the Air Force of Zimbabwe Air Marshall Elson Moyo, arrived in North Korea on February 6 to attend the 70th founding anniversary of the North Korean People’s Army (KPA).

The visit came just five months after the UN Panel of Experts wrote a letter to Zimbabwe government officials demanding to know the operations of North Korea’s Mansudae Overseas Project (MOP) Group of Companies, as stated in a UN report dated September 5 2017.

Moyo’s delegation, which was made up of senior officers from the Zimbabwe National Army and AFZ, attended a reception hosted by the Ministry of the People’s Armed Forces in honour of the military attache corps on February 6.

The delegation also visited Kumsusan Palace of the Sun where they paid tribute to President Kim Il Sung and leader Kim Jong Il on February 7.

The team visited Mangyongdae, the birthplace of President Kim Il Sung and were briefed on the revolutionary history of Kim Il Sung. They toured Mangyongdae Revolutionary School, the Victorious Fatherland Liberation War Museum and the Sci-Tech Complex.
The North Korea media reports also state that Kim Jong Un was presented a gift from the Commander of the Zimbabwe Defence Forces Phillip Valerio Sibanda which was conveyed through Pak Yong Sik, by Moyo.

Sources said the UN and US are curious to establish the nature of the visit in view of UNSC Resolutions on sanctions against North Korea.

The UN has been tightening screws on North Korea over its ballistic and nuclear tests.

In a statement on North Korea released on Tuesday, US Vice-President Mike Pence said the US and its allies were not backtracking on putting pressure on North Korea.

“Whichever direction talks with North Korea go, we will be firm in our resolve. The United States and our allies remain committed to applying maximum pressure on the Kim regime to end their nuclear programme.

“All options are on the table and our posture toward the regime will not change until we see credible, verifiable and concrete steps toward denuclearisation,” Pence said.

David McGuire, a public affairs officer at the US embassy in Harare, said although his country was encouraging countries to comply with the UNSC resolutions he was not sure what the delegation was doing in North Korea.

“We as the US have been increasing sanctions pressure on North Korea and we have been encouraging countries around the world, in conjunction with the UN Security Council resolutions, to comply with the resolutions,” McGuire said.

Asked whether the Zimbabwean’s military’s visit to North Korea is the kind of engagement the US wants to stop, he said: “I am not sure because I do not know what the delegation was doing there. Certainly, we do have questions on any kind of delegation that visits North Korea, especially wanting to know the nature of the business, what they will be doing.”