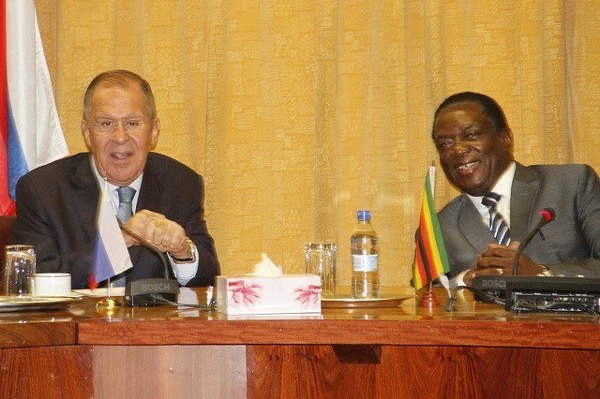 RUSSIA has pledged to provide military and technical assistance to President Emmerson Mnangagwa “to help deal with the political situation in Zimbabwe”.

Visiting Russian Foreign minister Sergey Lavrov told journalists after meetings with Mnangagwa and his Zimbabwean counterpart, Sibusiso Moyo that his country was ready to assist.

Mnangagwa swept to power last November on the back of a military intervention that forced former President Robert Mugabe to resign, and the new Zanu PF leader is now in the process of consolidating his position.

“The message from President Putin is to say Russia is willing to support the President of Zimbabwe in his efforts to stabilise the internal political situation in the country and consolidating the society,” Lavrov said.

Moyo said Zimbabwe and Africa would decide on who to befriend without being molested.

“Africa has a right to chart its course with any member country in the international arena. The visit by minister Lavrov has escalated the level of relations between the two countries to combine both political and economic relations,” he said.

Lavrov, however, said his country, which is accused of interfering in the United States elections two years ago, would not directly interfere with Zimbabwe’s domestic affairs.

“We never meddle in the domestic affairs of any country even though we continue to hear accusations from different capitals regarding the issue.

“We do not share this philosophy [of interference] and believe this is neo-imperialistic. It is up to the people of Zimbabwe, as well as all other countries, to determine their future. We hope the people of will express their will during the elections,” the Russian envoy said, citing reports in the US media that the Americans have interfered in “dozens of countries to bring about democracy”.

Mnangagwa, after taking power, faces his most critical moment, with Mugabe now claiming he was pushed out of power unconstitutionally.

The former Zanu PF leader has reportedly promised support for a faction of Zanu PF, known as G40, now morphing into a political outfit under the banner of the National Patriotic Front.

While the US and its Western allies like Britain and Australia have indicated that they will only fully co-operate with the authorities in Harare if there are free and fair elections due in the next few months, Lavrov said his country saw no need for conditions.

“We do not understand why we should impose any conditions on anyone. We are willing to co-operate on the basis of equality. We believe that these politicised steps to impose such things as sanctions interfere with free market forces and distort them illegally,” he said.

“There are three deals signed, but there is a separate arrangement with the ministry of Defence because we have always had cordial military relations with Russia.

“We are excited when major powers visit Africa. It’s good for Africa, we have a young population and we need capital to modernise our economies. It is up to us and we are competent enough to determine who our partners should be,” Mutsvangwa said, adding Zimbabwe would not be railroaded into any agreement.

Meanwhile, there are unconfirmed reports that Mugabe is in South Africa for a meeting with former education minister Jonathan Moyo and other members from the Generation 40 (G40) to ‘strategise’.

This came as tensions were mounting in Zimbabwe after Mugabe last week expressed support for the National Patriotic Front led by former cabinet minister and ally Ambrose Mutinhiri. Some officials in the ruling party have rounded on Mugabe for that, accusing him of trying to destabilise Zanu-PF.