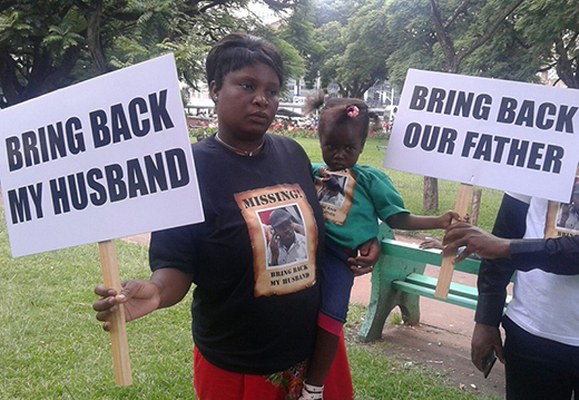 THE wife of pro-democracy activist Itai Dzamara who was abducted by suspected State agents three years ago has called upon President Emmerson Mnangagwa to help the family find her husband.

Dzamara was forcibly abducted in Harare’s Glen View High density suburb as he was leaving a barber-shop on 9 March, 2015 and his disappearance remains a mystery.

A tearful Sheffra told journalists during an interview at Africa Unity Square on Friday where Itai’s family, Civil Society Organisations (CSOs) and friends gathered to commemorate the life of the journalist-cum-activist that the police were doing nothing at all to find her missing husband.

Itai became popular after his ‘one man demonstration’ at the Africa Unity Square calling on former president Robert Mugabe to leave office just before his forced disappearance.

“Today it is three years since my husband was abducted. I feel very sad because as a family we do not know where he is. The police are not doing anything to find my husband. They are just quiet.

“To the government, I say, please help me find Itai Dzamara. Please, just say something about him. We want to have him home dead or alive,” Sheffra said as she fought back tears.

She also revealed that NGOs were no longer giving her any form of support and she was being helped by her husband’s family.

Meanwhile, CSO’s have voiced concerns with the failure by government to find Dzamara.

Amnesty International Director in Zimbabwe Cousin Zilala who also joined in the commemorations at the Square said: “We want the government of Zimbabwe to account for Itai Dzamara’s disappearance. They should show commitment to human rights by making sure that there is a full investigation on Dzamara’s disappearance bearing in mind that they made a commitment to Human Rights Council in 2016, Geneva that they would help find Itai Dzamara.”

“Yesterday (Thursday) at the Women’s International day commemorations, we were with Sheffra in mind thinking of what was in her mind? She wants closure on the matter. I believe that her concerns are genuine,” added Zilala.

Crisis in Zimbabwe Coalition, in a statement, said it “… takes great exception to the government’s apparent insincerity as far as the search for the missing activist is concerned.

“The safety and security of each and every citizen is a responsibility of the government. We, therefore, call for the government of Zimbabwe to account on his whereabouts.

“Despite a High Court order compelling the Zimbabwe Republic Police (ZRP) to search for the missing activist and give regular updates, his whereabouts remains a mystery and no updates have been given by the law enforcement agents up to now.

“The complete disregard of the court order by the ZRP is a huge cause for concern.”