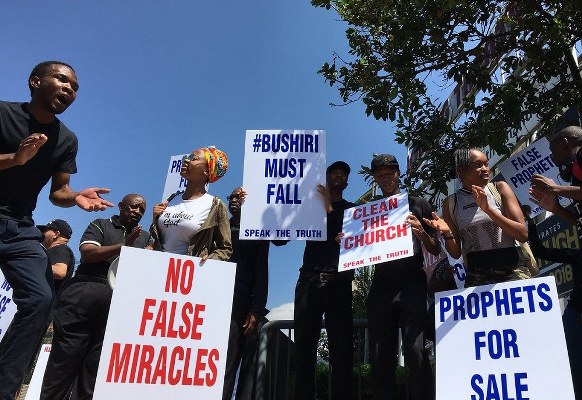 The group is expecting HUNDREDS OF PEOPLE on Wednesday 14 of March (today) to participate in the march which will start from Johannesburg Theatre Braamfontein at 10:30am.

Speaking to Onward Christian Radio one of the organisers Martins Antonio said the march is against false prophets who are wreaking havoc in the body of Christ, the church and breaking marriages and relationships. We are coming together in support of victims of se_xual assault and harassment happening in some of these prophet led churches, a lot has been happening in these churches a lot of victims have been threatened and silenced but we thank God for those who are now standing up to say enough is enough this must now be exposed and stopped.”

Demonstrators who are expected to come to the march at the iconic Johannesburg Theatre Braamfontein, are asked to dress in black. Martins Antonio told Onward Christian Radio that he is a victim of a false prophecy which wrecked his family.

“I have been abused verbally and I continue to receive all sorts of threats and nasty messages for speaking up against false prophets.” I am a South African born in Buffalo, I am from Pomfret, North West. My parents are from Angola and yes I have been called names by those who are uncomfortable with truth.”

Commenting on this proposed march Onward Christian Radio columnist and counsellor to victims of se_xual abuse Gloria Gudza (the female General of God) said, “We’ve been silent too long. A lot of people have kept this inside us for years and years.”

She stated further that “It is difficult for some young women who have been manipulated into se_x by church leaders to speak out. Most of the perpetrators are indeed prominent people in the prophetic churches so many broken girls have been dismissed as lairs or accused of trying to extort these rich prophets.

Season pongo Onward christian radio will soon properly launch the #TouchMeNot social media movement to help more women to find strength to speak up against these heinous crimes. Se_xual abuse is very damaging not only physically it also has serious mental and spiritual effects on these women. Many of our young daughters are broken and trapped in these dangerous situations where their spiritual leader becomes abuser and they are told it the will of God. They have nowhere to run and this is very scary.

We now calling all sensible individuals to action. Indeed, inaction in this case is as bad as the crime of r_ape itself. I call upon all women, all you young ladies out there to speak out: If you know of a women who has been se_xually harassed or assaulted by a Church leader write ‘#TouchMeNot’ as a status, we might give people a sense of the magnitude of the problem.

Let’s go and support the March on the 14 the time to stop all the abuse is now happy women’s month.”

The modern prophetic churches have been growing in Southern Africa and it is not known how those who are pro-prophets will react to this proposed march. It would be telling to see who responds to being called a false prophet.