Former First Lady Grace Mugabe’s son Russell Goreraza’s alleged South African girlfriend Dineo Gwendoline who recently cried out to the media when Goreraza left her while pregnant, has given birth.

According to Gwendoline on Instagram, she given birth to a baby girl earlier this week.

The following attachments are images of Grace Mugabe’s South African Grand daughter who was born earlier this week. 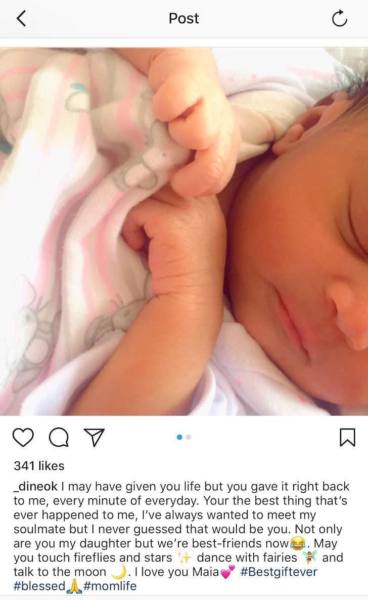 Last year, Goreraza’s mother beat up South African model Gabriella Engels, who was hanging out with her two sons, Robert Jnr and Chatunga.

South African authorities tried to have Grace arrested by the Harare government invoked diplomatic immunity to spare then President Mugabe the embarrassment of having his wife dragged before the courts for assault.

Grace has not been able to return to the country where she reportedly owns a real estate portfolio suspected to have been acquired using public funds.

Her other sons, Robert junior and Chatunga Bellarmine are said to be holed up at a mansion in the exclusive Johannesburg suburb of Sandhurst, which a company owned by their half-brother, Russell Goreraza, bought for R43 million in February last year.