Dr Muchada has been the Deputy Chair of the PSC at Public Service Commission.

A letter signed by Acting Secretary for Information, Media and Broadcasting Services R Chikowore said, “The Chief Secretary to the President and Cabinet, Dr Misheck Sibanda, has announced the appointment by His Excellency the President, Cde Emmerson Dambudzo Mnangagwa, of Dr Mary Margarat Muchada as Acting Chairperson of the Service Commissions until further notice. Dr Muchada’s appointment follows the retirement of Dr Mariyawanda Nzuwah as Chairman of the Service Commissions The appointment takes immediate effect.”

Nzuwah was retired after reaching the pensionable age of 65.

Nzuwah had been CSC chief for the past 26 years after taking over from Malcolm Thompson in 1992.

Dr Muchada joined the service in 1980 as Senior Research Officer in the Department of Research and Planning, subsequently in the then Ministry of Manpower Planning and Development.

She was subsequently promoted to the position of under-secretary in the same ministry.

In 1985, she was promoted to deputy secretary in the then Prime Minister’s Office for Policy Research and Analysis.

She was appointed secretary for Information, Posts and Telecommunications in 1994.

In 2000, Dr Muchada was appointed Zimbabwe’s ambassador to Italy and permanent representative to the United Nations Organisations in Rome before being appointed ambassador to Belgium. 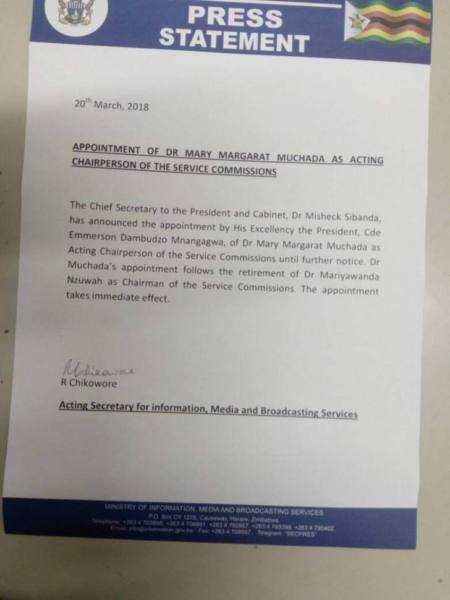