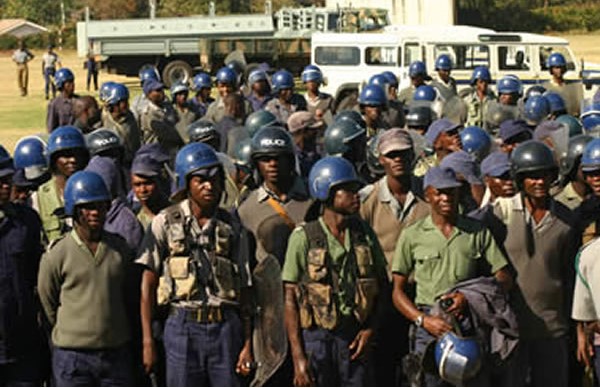 Parliament yesterday heard how heavily armed police officers numbering about 200, in mafia style, stormed the Mbada Diamond fields in Marange and looted gems worth millions of dollars before they broke television monitors and equipment in a raid which left workers fearing for their lives.

The raid happened in 2016 as former president Robert Mugabe’s government prepared to take over full mining of the diamonds in the gem-rich Chiadzwa, through the Zimbabwe Consolidated Diamond Company (ZCDC), after government did not renew licences of private companies that were extracting the diamonds in the area.

“Police arrived at the mine armed, abused our people, ransacked the place, operated like cowboys, broke our company safes, destroyed our equipment, broke our fence and all cellphones were taken into a room like they were criminals. They broke our safes, took our diamonds,” Kassel said.

Mbada Diamond’s chief security officer Jabulani Mkoko, corroborated Kassel’s evidence, and told the committee of their harrowing experience at the hands of police whom he said stormed the mine in a convoy of many cars and buses.

“On February 22, 2016 around 12pm, I received a phone call from our main gate which was the first gate when you get to the mine. The phone call was to the effect that there was a convoy of police and mines officials demanding entry; procedurally we clear everyone who comes to the mine. I then decided to drive to the gate but before I reached halfway I met the convoy because they had overpowered the guards at the gate.

“I was searched physically with all weapons directed at me. I asked what was happening, I was told by one of the persons who identified himself as the mine official, his name was Benaya Mavodza and I then realised that the most senior rank on the side of the police was the superintendent, I asked the senior lady who was there and she just said the police are under instructions from the ministry of Mines and all questions must be directed to the ministry.

“I said, can I see your documents, they said we don’t have. We were told to switch off the CCTV, switch off the communication system, to hand over the keys to them, and remove all the Mbada personnel from the mine. I said look, this is a big concession, there are millions of dollars and equipment in this concession but the answer was that we have taken over and the security issue is not your baby,” Mkoko narrated the incident to the committee.

“The police rushed into the control room and switched off the CCTV and the communication systems. When I realised that we are not making any headway, I said before I remove any of our workers, can we go to all the vaults then I can show what is there, literally they refused a handover-takeover in written form,” he added.

Mkoko said he then locked all the vaults with Mbada serial numbers and then assigned the police officers that were assigned to guard the vaults.

At the same time, villagers and artisanal miners seized the moment the police stormed the mine to swamp the Mbada Diamonds’ fields where they vandalised equipment such as solar panels.

“On the 24th (February), I heard a delegation was coming from Harare compromising the (then) minister (Walter Chidhakwa),” Mkoko said, adding that he was however, barred from meeting the delegation.

He told the committee that when he left Marange for the capital, he was told by one of the workers who had been left behind, that a box of diamonds had been stolen.

“After about a month when the ministry indicated to us that they were opening a window period for us to remove goods and as soon as I went into the vault, there was an empty box. I discovered the breaking in…yet police were deployed to guard the vaults,” Mkoko said.

The Marange diamond fields in Manicaland province, which are located a few kilometres outside Mutare, are considered to be one of the world’s biggest deposits of diamonds.

At the height of the mining of diamonds in Marange, Mbada Diamonds, Marange Resources, Anjin Investments, Diamond Mining Company, Kusena and Gye Nyame were some of the companies which were involved in the extraction of the gems in conjunction with the Zimbabwe Mining Development Corporation (ZMDC).

The mining companies were expelled from Chiadzwa after Mugabe made the startling claim that his government had lost a jaw-dropping $15 billion to alleged nefarious activities by some of the diamond mining firms.

In a controversial move, the government subsequently fired and replaced the mining companies with the State-owned ZCDC which now exclusively carries out all the mining in the area.

In 2012, long before Mugabe alleged that the $15 billion had been spirited away, a watchdog group campaigning against “blood” diamonds had also released a damning report in which it alleged that more than $2 billion worth of diamonds had been stolen from the Marange fields.

It also claimed that Mugabe’s inner circle, together with some international dealers and a large network of criminals had connived in “the biggest single plunder of diamonds the world has seen since Cecil Rhodes”.

“Marange’s potential has been overshadowed by violence, smuggling, corruption and most of all, lost opportunity.

“The scale of illegality is mind-blowing” and has spread to compromise most of the diamond markets of the world,” Partnership Africa Canada (PAC) alleged in its report that was titled: Reap What You Sow — Greed and Corruption in Zimbabwe’s Marange Diamond Fields.