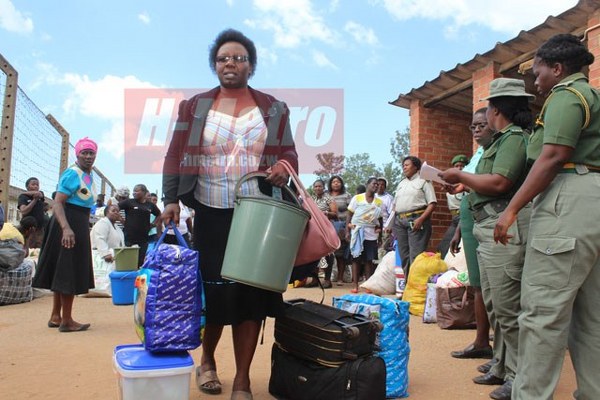 A woman vividly remembers gruesomely killing her son after he developed epileptic seizures.

The Seventh Day Adventist Molline Gomo says she still sees the images and how it all occurred as if it had happened yesterday.

Molline Gomo’s life was then confined to prison walls for the rest of her life for murdering her then 18-month-old-son.

She was among the women who benefited from the Presidential Amnesty which saw 87 women being freed from Chikurubi Female Prison.

“The picture is still vivid, clear and fresh in my mind. I see the images everyday at the back of my mind. It was gruesome and horrific, but I do not want to speak of it right now because it will override my happiness,” said Molline Gomo, as she hugged and embraced prison officers who congratulated her.

“I regret being in prison. The past 13 years to me were a waste and I do not want people to envy criminal activities. Handizive mweya wakandipindawo.”

The 37-year-old said she murdered her son after he developed epileptic seizures while four-months-old. Her mistake, she admitted, is that she failed to share her problems with other people.

“Sorrows are like water my brother, they can be poured in different vessels to lighten the burden. It is a lesson I have learnt now. My failure to share problems resulted in me killing my son.

“I was tired of getting in and out of hospital every now and then and I do not know what got into me that I had to kill him. It is just unfortunate that the father of my baby died, but I would have loved to share my life with him.

“There is a relief in me that is inexplicable. My in-laws, the Banga’s, used to visit me when I was locked up. They told me that they had forgiven me and that alone, showed me that there are people who care about others,” added Gomo.

Gomo, who comes from Kwekwe, said her brother Shingai was on his way to pick her.

“I will continue going to the SDA church because I want the Lord to lead the way. At the same time my spirit was empowered here in prison. Ndavakugona kusona uye nekugadzira musoro so I am going to buy a sewing machine so that I start from somewhere.

“The community out there should be able to help offenders. It could be difficult for people to accept that I have been pardoned, but for now that is not the matter with me now, prison experiences will help me fit in society,” added Gomo.

H-Metro also contacted Gomo’s brother, Shingai, who said his happiness was enormous to comprehend that he was reuniting with his “natural blood” after many years.

“I am happy, as a family we are happy. This joy is unbelievable. As a family we have agreed to support our sister in every way possible so that she fits in society. We remain a Christian family and we know this is the work of the Lord that she is now with us,” said Shingai.

Zimbabwe Prisons and Correctional Services National Spokesperson Assistant Commissioner Elizabeth Banda said the Presidential Amnesty coming in the month of March is a welcome gesture for all women.

“The amnesty coming in March is a relief for women. These people have families, they wronged society but they have paid the price in a legal way. Society should help integrate them.