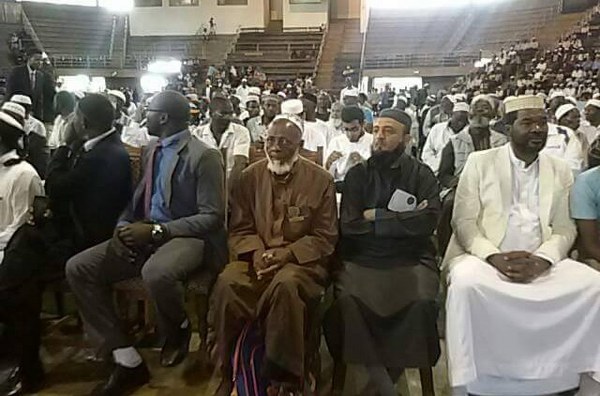 THE Supreme Council of Islamic Affairs in Zimbabwe has mobilised thousands of its members to vote for President Emmerson in the 2018 harmonised elections.

Yesterday, scores of SCIAZ members converged on Harare’s City Sports Centre to interface with Zimbabwe’s Presidency, represented by Vice-President Kembo Mohadi. Council leader Sheikh Ishmail Duwa told the gathering: “We thank the Government of Zimbabwe for allowing “aliens” to vote, the majority of whom are from the Muslim community.

“To date, we have registered 500 000 of our members to vote. As Muslims, we support Zanu-PF 100 percent because our policy is that we support the governing party and one which has people-oriented policies.”

VP Mohadi delivered President Mnangagwa’s address. The President said, “My message to you today . . . is that, as we move forward, we would like a Zimbabwe that is built on the pillars of peace, tolerance, love, forgiveness and unity as a firm foundation for development and an improved quality of life. “Since I took office in November 2017 as President of the Republic of Zimbabwe, I have used every opportunity to preach the above message. I believe that this is the same message you preach everyday. As we approach the harmonised elections this year, I urge the Supreme Council of Islamic Affairs in Zimbabwe to reach out to all Muslims with this message.”

The President said his Government was driven by the imperative of creating economic prosperity for all Zimbabweans. He implored the Muslim community to take advantage of the country’s abundant investment opportunities. Muslims in Zimbabwe representative Mufti Shuaib Asali thanked Government for promoting freedom of worship.

News Muza Mpofu - 20 January 2021 0
OUTSPOKEN Harare cleric and businessman Shingi Munyeza has surrendered his post as Faith Ministries pastor after he was forced to publicly admit to adul_tery...

News Sekai Moyo - 19 January 2021 0
Chief Mashayamombe, born Ignatius Chiketa Kanengoni, has died. He was 86. Chief Mashayamombe passed away at Norton Hospital where he had been admitted after developing breathing...
Loading...