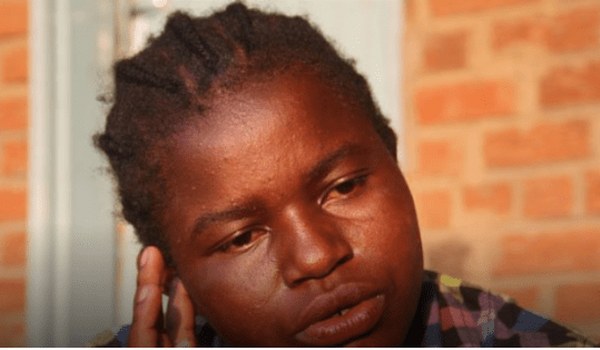 The women were part of 3 000 inmates released on a Presidential amnesty.

But in the midst of the carnival atmosphere, one former inmates’ face was soaked in tears. And they were not tears of joy.

Gladys Chikukura (21) cried because she did not want to be freed.

A few months after Gladys was born, her mother took off leaving her in the custody of her paternal grandmother.

She grew up in poverty as her single grandmother failed to fend for the family in rural Karoi.

After completing Form one, Gladys dropped out of school. Her father, who had since remarried, told her he did not have money to school a girl any further, though he did pay for the education of her step-siblings.

With no school to go to, Gladys became vulnerable ending up with a “boyfriend” and at 15 she was preg_nant. Her stepmother forced her to move in with the family of the person responsible for the pregnancy.

After giving birth, her reluctant in-laws gave her a torrid time, and in 2014 she left her baby home and moved to Harare after someone had secured a job for her as a maid in Damofalls.

Gladys looked for her mother, whom she found with the aid of her employer through social media platform Facebook.

But her mother was not pleased with the reunification.

In 2015, then aged 18, Gladys found a new job after her employer said she could no longer pay for her services.

Her new employer, whom she identified as Ms Mombeshora, did not pay her for nearly a year. So in 2016 she left without notice and found another job as a maid, this time in Crowhill.

She was to be confined in remand prison from December 2016 to February 2017, and on Valentine’s Day last year, while others were showered with love, Gladys was ushered into prison for the first day of an effective six-year sentence.

Throughout the trial, Gladys maintained her innocence, and during an interview with The Sunday Mail last week, the unhappy young woman insisted she was wrongly convicted.

“I failed to defend myself in court because I would cry continuously,” she sobbed.

“I was young and did not understand what was happening. I kept asking myself why me? It pains to work for nearly a year without being paid and when you finally let go, false accusations are levelled against you.

“Many people are celebrating their release, but I have nowhere to go. For me, there is no celebration and I think I am cursed. No one came to stand by me during trial, I never received a single visitor while in prison and upon being freed there is no one to celebrate with me or give me a place to stay.”

Gladys said when her name was called out as prison officers announced the names of pardoned inmates, she was gripped with dread because she had nowhere to go.

Gladys believes prison gave her a home and now the amnesty has taken that away from her.

The young woman is now at Prison Fellowship, an organisation that assists inmates and former prisoners in Waterfalls Harare.

She remains uncertain as to how long the organisation will take care of her.