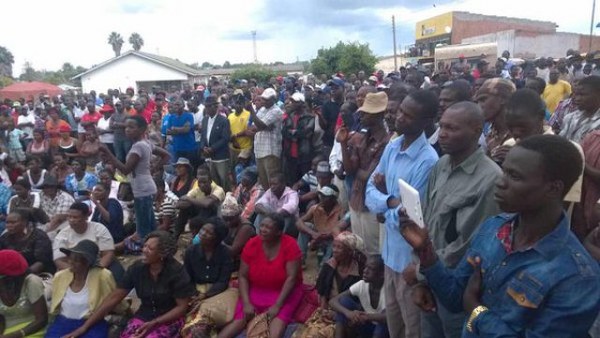 THE leader of a newly formed political outfit, Democratic Opposition Party (DOP) Mr Harry Peter Wilson allegedly ditched more than 400 party supporters, leaving them stranded and hungry after addressing them at a rally in Norton on Saturday.

Mr Wilson, a former Mavambo Kusile Dawn executive member, allegedly asked party supporters from Manicaland and the three Mashonaland provinces to attend his rally on the understanding that he would reimburse them transport money and also give them money for food.

The party spokesperson Ms Amanda Sithole said scores of party supporters who travelled to Norton from Wedza, Uzumba-Maramba-Pfungwe, Murombedzi and Mt Darwin are failing to return home after her boss fled to Bulawayo soon after addressing the rally.

“The president of the party made an undertaking that he would cater for members who came from various districts in Mashonaland East, West and Central and Manicaland to attend the rally in Norton. He promised to refund them their transport monies, sadly he reneged from his promise and the members are now stranded in Norton. This is grossly unfair and inhumane considering that these people made an effort to attend the rally,” she said.

Ms Sithole said Mr Wilson claimed that he had set aside $1 200 to cater for the transport expenses and food for the crowd.

Contacted for comment, Mr Wilson refuted the claims, saying those who attended the rally came on their own volition.

“I did not promise anyone money for transport and those who attended the Norton rally came on their own free will. Those who are complaining are people who simply want to extort money from me and their claims are absolutely nonsensical. In fact, we had a great rally and everyone was offered food and drinks,” he said.

Mr Wilson challenged the aggrieved party members to produce a written agreement confirming that he agreed to refund them transport money.

He said he will contest in the presidential race and his party will also field candidates in all constituencies.

At least 112 political parties have registered with the Zimbabwe Electoral Commission (ZEC) to contest in this year’s harmonised elections.

A majority of the parties become visible towards elections and disappear soon after the announcement of results.

President Emmerson Mnangagwa has even questioned the authenticity of the number of new political parties that have been formed in the past few months to contest the elections.

The President was shocked by the huge number of the parties, saying he would soon order an investigation to find if the political parties were genuine.

Cde Mnangagwa, who is also Zanu-PF’s First Secretary, said he would still meet opposition political parties’ leaders over the upcoming elections but will not lose sleep over those who would want to boycott the polls, which are scheduled to be held by the end of July.