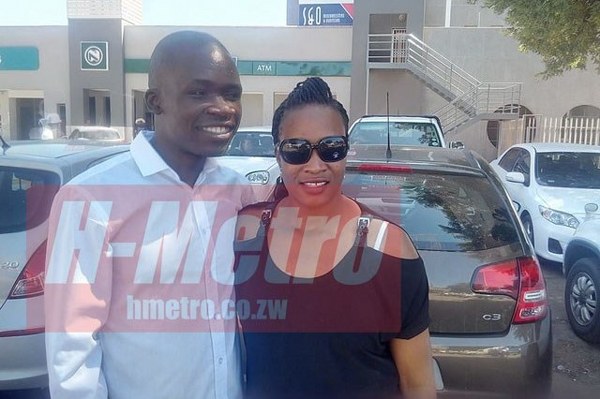 A MARRIAGE of 12 years is in turmoil as the husband accuses his wife, who is a police officer, of cheating on him with her workmate.

Danias Urayai, 35, said he was heartbroken after learning that his wife Tendai Nyakanda, 32, a traffic cop at Harare Central Police Station was cheating with one Alec Kariyati.

Danias, who claims to be a cross border and spends most of his time in South Africa, said he recently realised his wife was cheating after he came across Alec’s messages in her mobile.

“We once had an argument about her co-worker Alec whom she once cheated on me with some years ago.

“I saw Alec’s messages in her mobile last week and I confronted her asking why they are still talking, and that is when I had to investigate what she had been up to.

“The neighbours told me that Alec used to come and pick my wife most of the times when I was in South Africa,” he said.

He claims his children confided in him about Tendai’s shenanigans with Alec.

“My children even opened up to me that they went for braai at Zindoga Shopping Centre during the Christmas holiday in company of Alec and their mother. They also said they shared the bedroom with their cousins whenever Alec visits them at home in my absence.

“It is disheartening that she was cheating in front of my children and in our house,” he said.

Danias said he was also worried as his wife has developed a habit of coming late at around 10pm or even 11pm.

“I also once caught her coming out of her sister’s room at Morris Depot camp covering her body with a towel in the company of Alec as her sister was not around.

“I went to confront her and she screamed and claimed that I physically abused her and I was arrested and slept in police cells for a day since Alec connived with other police officers to arrest me.

“Alec was also in the habit of threatening me using his position as a police officer,” he told H-Metro.

Danias said his wife has also been cheating with other men claiming that she was single.

“She once cheated on me with Blessing who is a manager at a supermarket in the avenues and Edwin, a car dealer in Eastlea.

“I have since confronted the two and they told me that my wife told them that she did not have a husband and we resolved our differences but Alec does not want to leave my wife,” said Danias.

Tendai has however refuted the claims by Danias saying they divorced in 2012.

“We divorced in 2012 though we are still living in the same house but different rooms.

“All that he is saying are lies; the relationship that I have with Alec is that of co-workers only.

“Iye kana achiziva kuti mukadzi wake ih*re anoswera achimuteveererei? I am not in a relationship at the moment and I have never had a relationship since we divorced in 2012.

“The reason why I separated with him is because of that behaviour of always accusing me of things I do not do.

“He even called my relatives telling them about that Alec story and I am fed up of that.

“He also physically abused me anorova plus anoruma,” she said.

In another interview, Alec accused Danias of being insecure.

“He has confronted about six sergeants accusing them of having love relationships with his wife.

“All the allegations saying that I slept with his wife at their home are not true. I am single and dai ndaida kumukwi** ndaizvitira kumba kwangu since I stay alone,” said Alec.