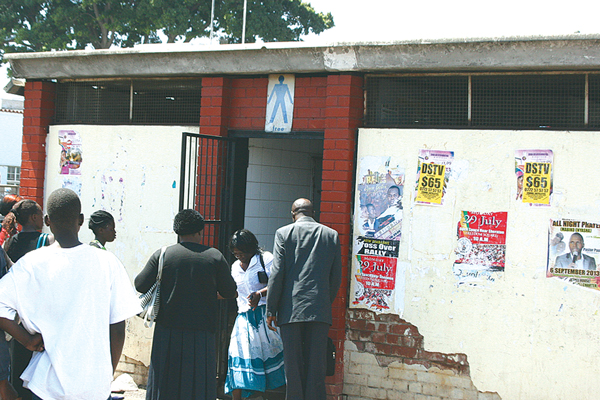 Harare City Council has sold one of its public toilets in the high-density suburb of Highfield to a private operator who has converted it into a restaurant.

The development has left small to medium-sized enterprises [SMEs] operating from the Machipisa area without ablution facilities.

MPs from the Parliamentary Portfolio Committee on Small and Medium Enterprises discovered the sad state of affairs during a recent tour of SME sites in various parts of the country.

In a report presented to Parliament, the committee noted that most SMEs were operating in areas without adequate ablution facilities.

“The challenge of ablution facilities was raised by SMEs operating in various areas, including Mupedzanhamo, Guruve and Machipisa,” said committee chairperson Margaret Mhangami.

“The committee learnt that the public toilet at Machipisa had been converted; partly into a restaurant and storeroom after (it was sold) by Harare City Council to a private operator, leaving SMEs to pay for use of such facilities.”

Zanu PF MP Goodluck Kwaramba, who seconded the motion, said some of the toilets meant for SMEs were turned into beerhalls.

“At Machipisa, some of the toilets have been turned into beerhalls and they sell their wares without proper ablution facilities,” he said.

“The rents that they pay are very high and they cannot pay taxes.”

SMEs that were most affected by lack of toilets and storerooms were furniture manufacturers at Guruve Centre and Machipisa.

“Markets visited by the committee were also in a state of dilapidation as evidenced by cracked floors, leaking roofs and sewage pipes exposed at Machipisa and Mupedzanhamo in Harare,” the committee said.

The committee report also revealed that around 2 000 second-hand clothes traders at Mupedzanhamo were evading taxes through smuggling.

“Traders at Mupedzanhamo Market lamented that high customs duty charges imposed by the Zimbabwe Revenue Authority, currently pegged at $5 per kg for second-hand clothing, were threatening the viability of their businesses,” the report added.

“Your committee learnt that there were about 2 000 traders at Mupedzanhamo, out of which none brought goods into the country through the designated ports of entry in order to evade the prohibitive customs duty charges.”