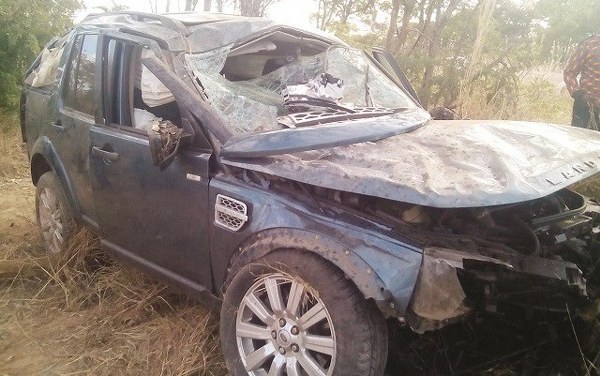 TWO people from the same family died on the spot while four others were seriously injured when the vehicle they were travelling in veered off the road and overturned after a tyre burst.

The family members who were travelling in Land Rover Discovery were on their way to a wedding.

Some of the family members had come from South Africa and were joined by other relatives in Plumtree when tragedy struck while on their way to Bulawayo for the wedding.

The accident occurred at the 50KM peg along Plumtree-Bulawayo Highway before Marula area at 8PM on Saturday.

The deceased were identified as Rachael Nkomo (60) from Plumtree and Lubelihle Nkomo (12) from Johannesburg in South Africa.

The driver, Mr Diliza Nkomo (41) from Johannesburg in South Africa, was seriously injured with three other passengers.

“We received a report of a family that was involved in a road traffic accident that killed two on the spot and injured four others, including the driver.

A family member who preferred not to be named said the family was travelling to Bulawayo for a wedding.

“A rear left tyre burst and the driver lost control of the vehicle causing it to veer off the road to the left side. It overturned and rolled several times,” said the family member.