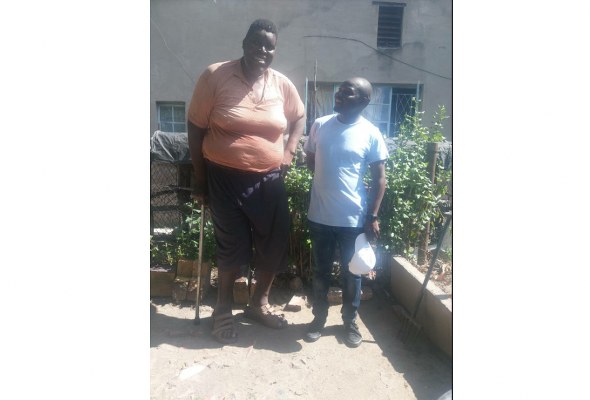 The vast coal reserves in Hwange are not the only outstanding thing about the mining town as it is home to arguably the biggest man in Zimbabwe known as ‘Big Charlie.’

The giant is still going strong despite falling on hard times and living from the generosity of the community.

Weighing a staggering 288kg and towering over 2,10 metres tall, Charles Nyoni is Hwange’s own Goliath.

He might not be the same height as Robert Pershing Wadlow, the tallest person in history, but ‘Big Charlie,’ has a superhuman stature.

Born over five decades ago, Big Charlie is the first born of the late Robison Samurobu Nyoni and Estel Ndlovu.

He says his brothers are also giants but however his situation was the worst and he recalls how his mother struggled to carry and feed him.

“I grew up in Jambezi and my father is a victim of the Kamandama mine disaster. We are a family of giants but my siblings are not as big as me. My mother always said carrying me while young was always a big challenge,” said Big Charlie.

In 1984, Big Charlie underwent surgery and was told by the doctors that he suffers from gigantism acromegaly which is excessive growth due to hormonal imbalance.

His situation was worsened after he was retrenched.

“I was retrenched by the mine some years back and life has never been the same again. I am diabetic and in serious need of assistance to access medication. Getting food and clothes is also a challenge as you can see this body is big,” Big Charlie pleaded.

Getting the right shoe size has been a headache for him since childhood.

Currently, Big Charlie wears size 24 and there is no local shoe company which can manufacture such footwear.

The Methodist Church member said despite initial challenges in securing a partner he finally met his soul mate few years ago.

“I am married and we are blessed with two children. They are also growing big,” he said.

Well-wishers from Europe used to donate some shoes and clothes to Big Charlie.

He feels it is time locals also come to his rescue.