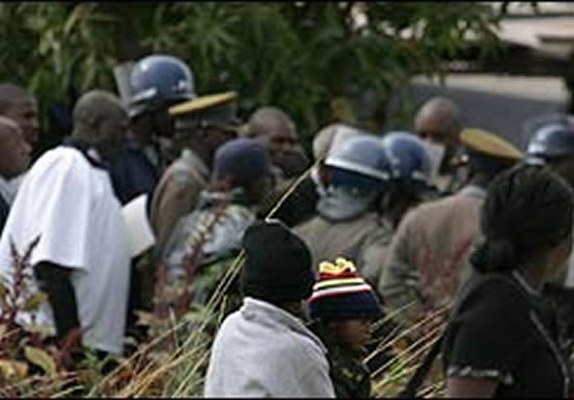 SIX members of an apostolic church in Mbembesi, Umguza District were injured after four men allegedly stormed their church and pelted them with stones before attacking them with knobkerries during a service on Easter Sunday.

The attackers, who were suspected to be drunk, allegedly stormed into the Apostolic Faith and Acts Church and started dancing haphazardly while fo_ndling some female congregants at around midnight.

They also allegedly openly prop0sed love to women in front of other congregants.

Mzwandile Mafohla (21), Mbongeni Khubone (23), Nkosikhona Mdluli (23) all from Mbethe Village and Lulukhani Hadebe (25) of Sojini village in Mbembesi reportedly fled from the scene after one of the church members drew a pellet gun and fired warning shots into the air.

“I got a call from one of the pastors who informed me that they were being attacked. I informed the police who rounded up the suspects,” he said.

“Those boys are a problem in the area. We can’t continuously live in fear because of a few people. We hope they get jailed so that this becomes a lesson to everyone. What’s worrying is that it seems they get support from their parents who were even sending them food while they were in police cells,” said the Chief.

Pastor Edward Ngulube, who heads the church in Mbembesi, said:

“They were drunk and started dancing and pulling girls while openly prop0sing love to them inside the church. Our youths shoved them out and that’s when they picked stones and started attacking everyone”.

Pastor Ngulube said there were some disputes within the church which split up a few years ago.

News Muza Mpofu - 18 June 2021 0
A GRADE One pupil at Mahenye Primary School in Chipinge was on Monday trampled to death by an elephant. The deceased, California Chimbi, met her...
Loading...