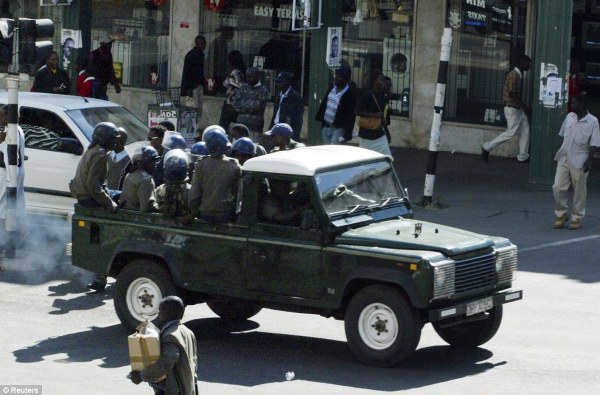 POLICE in Harare on Wednesday beat up and seriously injured some suspended ZESA workers as they attended disciplinary hearings at the power utility’s Wayne Street offices.

Zimbabwe Congress of Trade Unions (ZCTU) Secretary General, Japhet Moyo said the workers, who are leaders of trade Unions in the energy sector, were briefly detained at Harare Central police station before they were released into the custody of their lawyers.

“The ZRP pounced on the union leaders at ZESA offices during the hearing process for some of the employees who are being charged for participating in a job action against corruption at the parastatal,” he said in statement.

He said the workers were expected to appear in court Thursday facing charges of disorderly conduct.

“We strongly condemn the police brutality as it is contrary to the constitution of Zimbabwe. We also call upon the police not to interfere in purely labour issues and leave them to competent institutions,” he said.

Police spokesperson, Paul Nyathi said he was in a meeting and referred questions to Harare provincial spokesperson, who was not immediately available for comment.

ZESA has been embroiled in a labor dispute with its workers over a 2012 Collective Bargaining Agreement which the power utility company has been reluctant to honor.

The company recently suspended some of the workers, among them the ZCTU First Vice President, Florence Taruvinga.

The ZCTU has since reported the wholly government owned company to the International Labor Organisation for unfair labor practices.

The International Trade Union Conference (ITUC) Global Rights Index report for 2017 rated Zimbabwe among the worst countries for workers in the world.

News Nelson Bhebhe - 26 November 2020 0
RELATIVES of the late socialite and businessman Genius Ginimbi Kadungure and other possible beneficiaries of his estate, yesterday unanimously accepted an unsigned will recently...

News Tshuma Rueben - 26 November 2020 0
Zim dancehall chanter Seh Calaz’s baby mama Moira knight has got tongues wagging with her post that seems to be a direct jab to...

2 in big trouble after being found at Gweru Air Force of Zimbabwe plane...

News Muza Mpofu - 26 November 2020 0
PREPARATIONS for final examinations at Dambudzo Secondary and Lundi Primary schools in Zvishavane have been affected after a violent hailstorm destroyed infrastructure at the...

News Sekai Moyo - 26 November 2020 0
A LEAKED audio recording of a top MDC-Alliance official reveals stunning details of how the opposition party planned a wave of terror that involved...