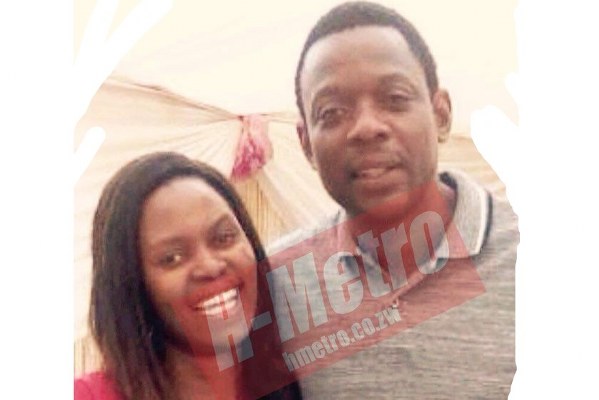 A NURSE’S private wedding with a married UK based man set for Saturday in Waterfalls looks set to be disturbed by a team of protestors sent by the latter’s wife, H-Metro has learnt.

Mavis Sibanda is alleged to have snatched Lesley Amos, 52, and the two are expected to tie the knot tomorrow behind the latter’s wife Dorothy Mutetwa’s back.

H-Metro has a copy of the wedding invitation card clearly marked ‘STRICTLY BY INVITATION and REGRETS NO CHILDREN’. The card also leaked to Dorothy who was left in England and she has organised her friends and relatives to demonstrate against the presiding marriage officer expected to join the alleged ‘unholy matrimony’.

“Yes I am wedding on Saturday and the wedding is perfectly legal. Dorothy is now my ex as were never married. In UK you can live together as boyfriend and girlfriend for decades without being husband and wife.

“I tried to pay lobola for Dorothy but her relatives refused my money. These are the same relatives that want to come and disrupt my wedding but I have known this for a while and I will deal with them. I have engaged the police and this is a strictly by invitation wedding. Even you, H Metro are NOT invited as well,” said Lesley.

Dorothy told H-Metro that Lesley used their family money to organise the expected wedding assisted by his sisters Mollen Kaswaurere and Lynet Chidyamatamba.

“My husband was seduced by Mavis and their plans to tie the knot were kept secret as his sisters Mollen and Lynet were arranging everything while he was here,” said Dorothy.

“My relatives discovered this private wedding after one of the invitation card was given to one of the family friends.

“We are to confront the marriage officer by the gate since invitation is restricted and ask if it is allowed in Zimbabwe to solemnize private weddings given that I am customarily married to Lesly for the past 21 years with two kids.

“Mavis is after relocating to United Kingdom and decided to marry my husband by engaging a church pastor.

“My husband is protesting my decision to confront aunt Mollen and Lynet over accommodating Mavis after I heard that the two were in an illicit affair.

“To be honest with you I am the one who facilitated travel arrangements for my husband to live in United Kingdom and supported him for some years before he got a job and today he is using family money to marry Mavis,” said Dorothy.

Contacted for comment, Mavis a single mother, denied plans to marry Lesley or knowing him saying H-Metro had called the wrong number.

“I am not marrying anyone this Saturday and I do not know anyone by the name Lesly. It’s a wrong number,” said Mavis before hanging the phone.

Mollen, with one of the contact numbers on the invitation card, denied knowledge of the wedding and dismissed Dorothy saying Lesly has one wife who is Mavis.

“I am surprised that you have a wedding invitation with my contact number,” said Mollen.

“Lesly is my cousin brother based in UK and Mavis is his wife not Dorothy and the two never agreed to tie the knot as alleged.

“Ndinonzi Mai Daka ndinogara ku Chinhoyi send me the invitation card so I verify what you are saying,” said Mollen who refused to entertain questions after the card was sent to her.

JUST IN: 6 killed, 219 arrested as violence continues in KZN and Gauteng

News Muza Mpofu - 12 July 2021 0
Three Zimbabwean men and a South African national have been arrested by police in Limpopo province who had found them with three truckloads of...

JUST IN: Man found lying on ground while bleeding from the head

News Sekai Moyo - 12 July 2021 0
THREE men from Bulawayo have been arrested for allegedly stabbing a man with an okapi knife over an undisclosed issue. Mgcini Xaba (32), Pride Sibanda...

Chinese boss in big trouble for locking workers inside mine compound and treating them...

News Tshuma Rueben - 12 July 2021 0
A KWEKWE man is battling for life in hospital after his 13-year-old stepson stabbed him on the chest for ending his relationship with the...

People think I’m not well in my head: Woman tormented after refusing to cook...

News Edmore Huni - 12 July 2021 0
SHE has had no peace for 10 years, thanks to a tokoloshe that’s been tormenting her. This has made her life miserable and the 45-year-old...

News Tanya Mugabe - 12 July 2021 0
IT seems as though a dark cloud is hanging over the Zuma family in Nkandla north of KZN. Just as they are still digesting the...

TB Joshua to perform miracles from the grave? Shock as congregants pray while touching...

News Muza Mpofu - 12 July 2021 0
POPULAR Nigerian pastor Prophet TB Joshua was laid to rest on Friday, 9 July. But the question everyone is asking is whether the prophet is...

News Muza Mpofu - 12 July 2021 0
Sporadic violence has erupted, with dozens arrested after looting in KwaZulu-Natal, where ex-president Jacob Zuma is in jail, and in Johannesburg. Police said in a...
Loading...