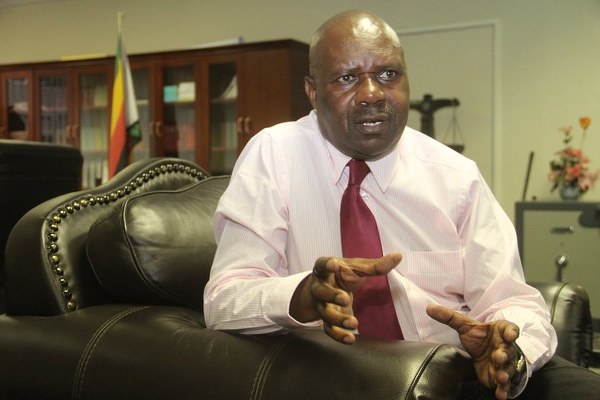 A Harare lawyer on Friday opened a police case against prosecutor-general (PG) Ray Goba for allegedly threatening him as the fallout over the rape trial of Prophetic Healing and Deliverance Ministries leader Walter Magaya deepened.

Nyikadzino Singano, who is representing a woman who was allegedly ra_ped by Kudakwashe Elliot, had earlier in the week taken Goba to task, accusing him of protecting the ra_pe suspect.

Elliot is one of the witnesses lined up by Goba to testify in Magaya’s trial, but Singano has queried how the PG interviewed the alleged fugitive.

The lawyer also reported the PG to the Law Society of Zimbabwe (LSZ). He said Goba called him on his mobile phone on Thursday and hurled insults at him.

“During the phone call aforesaid which I recorded, the accused was indescribably demented,” he said.

“He appeared to have taken leave of his senses. He started insulting me with unprintable words, including calling me ‘s…t’.

“He went on to threaten to deal with me and to cause my arrest.”

The complainant in Magaya’s trial has vowed not to give evidence against the clergyman claiming Goba was trying to force her to give false testimony.

According to Singano, in August 2016 his client was allegedly se_xually attacked by Elliot.

When the matter was reported, the suspect, who is said to be a Central Intelligence Organisation (CIO) agent, disappeared.

Last Tuesday, Goba, who is the leading prosecutor in Magaya’s trial, informed High Court judge Justice Amy Tsanga that among his State witnesses was Elliot.

This prompted Singano to write to the PG questioning how he had interviewed the “fugitive” without reporting him to police.

Goba hit back, accusing Singano of defeating the course of justice in Magaya’s trial.

The PG said he had never spoken to Elliot. Singano approached the LSZ seeking to have Goba disciplined over his alleged conduct.

After receiving a copy of the letter, which had been copied to Justice minister Ziyambi Ziyambi and the Judiciary Service Commission, Goba allegedly became agitated and contacted Singano on his mobile phone.

He allegedly yelled: “You must stop this kind of thing because I am really going….you are really pissing me off and I want to tell you that.

“I want you to provide that proof and I want you to retract the ‘s….t’ that you are putting in the newspapers. You understand that?”

When Singano asked Goba if he was threatening him, the PG charged: “It is not a threat, I am actually telling you.

“l don’t know this rubbish that you are writing all over the place.

“I want you to provide that evidence (and) if you fail to do that you are the one who is going to get arrested. There is no threat in that I am going to deal with you.”

News Cynthia Goba - 16 July 2021 0
A Zaka man will spend the next five years in jail for attempted murder after he attacked his friend with an axe for having...

News Edmore Huni - 16 July 2021 0
A 35-year-old Mwenezi man is in police custody after he stabbed and killed a rival suitor over a well-endowed girlfriend last week. Takudzwa Mamboma of...

Man pretends to be his wife & chats with her boyfriend on her phone,...

News Edmore Huni - 16 July 2021 0
A Rushinga man was dragged to the Chief’s Court for bedding a married woman. Tonderai Mutegede was dragged to Chief Makuni’s Community Court by George...

News Cynthia Goba - 16 July 2021 0
TEACHERS’ representatives have called on government to urgently release funds and capacitate schools to provide digital learning amid a surge in COVID-19 infections and...