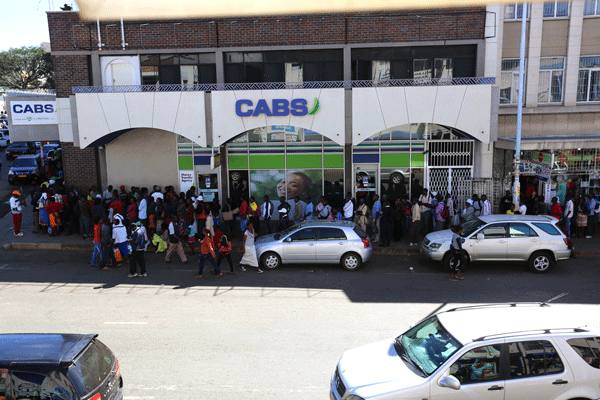 THREE people are in trouble for squandering different amounts of money amounting to nearly $279 000 that was erroneously deposited into their accounts by the Central African Building Society (CABS) following technical glitches at the financial institution last year.

The costly mistake also resulted in the bank firing 13 Information Technology (IT) employees after the error was detected.

One of the three CABS clients who got the “windfall” is Kelvin Kutadza (24), a student nurse at Gweru Provincial Hospital who squandered $54 000 that was erroneously deposited into his account following the bank mistake.

He pleaded guilty and was remanded in custody to today for sentencing following his conviction.

“The accused is found guilty of 54 counts of theft and is remanded in custody to Monday for sentence,” said Mrs Msipa.

In his defence, Kutadza said as a devoted Christian and a believer in miracles, he thought the money was miracle money when he saw the surprisingly huge figure in his savings account balance.

“When I checked my account and saw the money, I thought it was miracle money. I’m a Christian and thought that my prayers had been answered and I regret using the money.

“I’m a final year student nurse at Gweru Provincial Hospital and I am supposed to graduate on May 5. May the court pardon me,” said Kutadza.

It is the State case that between July and October last year, CABS was upgrading its IT system resulting in functional challenges in updating balances of accounts.

The system, the court heard, failed to record the correct figures each time a client transferred money from the CABS bank account to an Ecocash account or any other bank account using the electronic banking system.

It is alleged that the accused person discovered this systems failure and capitalised on it.

From July 5 to September 20 last year, Kutadza using his mobile phone, transferred various sums of money from CABS to his Ecocash number and to his MBCA savings account prejudicing CABS of $54 052. 34.

According to court papers, two other CABS clients in Gweru who withdrew $20 000 and $205 000 that was deposited into their accounts through the error are expected to appear in court soon.

News Sekai Moyo - 4 March 2021 0
Broadcaster and Journalist Karima Brown has passed away on Thursday morning from COVID-19 related complications. This has been confirmed by her family and employer ENCA,...

News Muza Mpofu - 4 March 2021 0
A Zvishavane lodger is in court after he allegedly inserted his finger into the underwear of a girl who was washing some clothes before...
Loading...