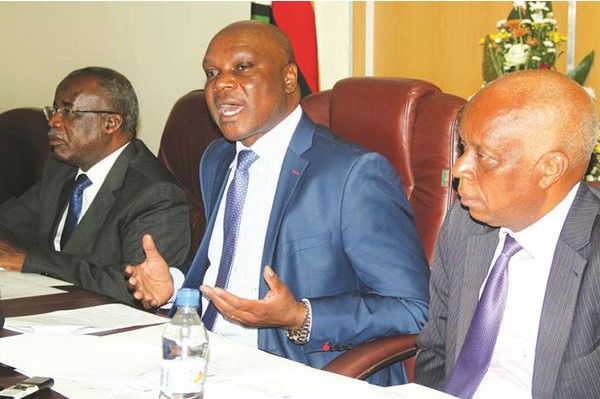 FORMER secretary for mines, Francis Gudyanga yesterday claimed that there were powerful forces controlling the diamond mining sector, saying he had received unspecified threats from people he declined to disclose, as the parliamentary probe into missing diamond revenue took an intriguing turn.

Gudyanga flatly declined to say who threatened him when he appeared before the Temba Mliswa-led Parliamentary Portfolio Committee on Mines and Energy, saying he had been persecuted over diamond issues and arrested three times since he left the Mines ministry.

“I cannot disclose anything because I was threatened,” he said.

“It affects me because since I resigned, I have been arrested three times and the issues are at the courts.”

To add to the intrigue, former Mines minister Walter Chidakwa voiced his frustrations with diamond mining, saying other minerals were easier to administer.

Chiadzwa mining activities between 2009 and 2011 after former President Robert Mugabe’s government could not adequately support them.

Former Central Intelligence Organisation (CIO) boss, Happyton Bonyongwe said the spy agency’s operations in Chiadzwa at Kusena Mine were clean, but the ZRP were said to have been engaged in shady deals, where they forcefully chased away other shareholders and took all the diamonds which have not been accounted for.

The Zimbabwe National Army were said to have shares in Anjin, and they did not contribute to the fiscus, while their books were said to be unaudited.

Bonyongwe told the committee that the CIO had 50% shareholding at Kusena Mine in Chiadzwa, with the other half belonging to ZMDC.

However, former State Security minister Didymus Mutasa professed ignorance to CIO operations, saying during his tenure there was never any discussion about mining activities involving the spy agency.

“The context of participation of the President’s Office into mining has to be understood in the context of the economic situation we were going through as a country, where there were things that needed funding and Treasury could not fund us and they found it necessary to undertake mining operations to raise funds,” he said.

Bonyongwe said they entered into a joint venture with China International Fund, which brought in mining equipment worth $10 million.

Masimirembwa and Gye Nyame projects manager, Munyeza gave a gory narrative of how the ZRP roughed up other shareholders, as they grabbed all the diamond mines.

Masimirembwa told the committee that Mpofu was responsible for bringing the ZRP into Gye Nyame, ordering at first that they should be allotted 10% shares, and later ordered the shares to be doubled.

Munyeza said he had invested $5 million, but the Ghanaian partners struggled to bring in investment, resulting in their expulsion by the police in July 2013.

He said in April, two armed police officers came into his office and demanded keys to the diamond vaults.

“I refused because the plant was built using our funds, but they drove me to CVR building and I was detained for hours and forced to hand over the keys.

“I do not know what transpired later with the diamonds because we left and the police continued mining.

“We then wrote letters of what transpired to Mugabe and Mpofu alerting them that we no longer had control and the police were mining on their own,” Munyeza said.

Mliswa asked Mpofu, who appeared before the committee, not to give oral evidence until Speaker of Parliament Jacob Mudenda has made a determination over their fallout.

This followed Mpofu’s refusal to testify in the matter until Mliswa recuse himself.

Former Police Commissioner General Augustine Chihuri failed to turn up to answer on the allegations of police using brutish force in Chiadzwa during his tenure.
Mliswa said his whereabouts were still a mystery and efforts to get him attend Parliament through his successor Commissioner-General Godwin Matanga were also fruitless, as they failed to locate him.

Matanga was represented by his deputy Innocent Matibiri, who professed ignorance over police’s alleged heavy-handedness in the diamond fields.
“I must state that I know absolutely nothing about that entity Gye Nyame.

“The ZRP is an organisation of 50 000 people and assignments are deployed to each of us and so we know nothing,” he said, adding not even Matanga knew about Gye Nyame.
Matibiri said he was unaware of who ordered ZRP to send heavily-armed details to the diamond fields.

“I do not know about all these other issues that you are raising,” he said, while former Home Affairs minister Ignatius Chombo also professed ignorance over the matter.

Deputy Commissioner-General (crime) Josephine Shambare added: “It appears to me that there are some mining operations that the police did not know about, for example that armed police officers stormed into Marange and came out with vaults, and the Gye Nyame operations.”

Mliswa then accused Matibiri and Shambare of taking advantage of Chihuri’s absence to nail him.

“You think your failure to answer this exonerates the police as an institution,” he said.

Matibiri said the problem was that Chihuri did not inform other bosses about the mining operations and probably assigned other people.

Retired police commissioner, Mekia Tanyanyiwa told the committee that contrary to Matibiri’s testimony, commanders were involved in the deployment of armed officers to the diamond fields.

“Are you afraid to say the truth because you might be retired?

“Some of us were retired within 12 hours.

“The deployment was there and the officers deployed received allowances, transport and fuel. Everything was engineered and authored from Harare.”

Chidakwa told the committee that the government decided to consolidate diamond mining after the licences of all diamond miners except DMC and DTZ Ozgeo had expired and diamond mines were failing to declare dividends.