A wedding ended in tears and disgrace when a UK based man who tied the knot with a local nurse failed to bar his in-laws from humiliating him at his wedding on Saturday.

The groom, Lesley Amos, 52, was forced to leave guests for almost three hours as he engaged police after his in-laws from a previous marriage crashed the wedding venue threatening to stop the marriage.

Guests were also warned not to take photos at the venue or risk being thrown out.

Lesley’s father in-law led his team in confronting marriage officer bishop Paradise after declaring that Lesley and Mavis were husband and wife basing on a certificate he said was given to them on the 3rd of February at Harare Magistrates Court this year.

“I am representing heavenly government and I thank the constitution of Zimbabwe because the two have already appeared before a Harare magistrates court where they obtained a marriage certificate which is here,” said bishop Paradise before asking for a round of applause from the guests.

“I am not going to take most of your time today. I am going to skip most of the things that include enquiring if there is anyone with a lawful query to give for the two not to be joined in holy matrimony since the two have already tied the knot before magistrate,” said Bishop Paradise forcing Lesley’s in-laws to walk to the front and confront him.

Police moved swiftly and controlled the situation after one of the guests was involved in a scuffle the best man. 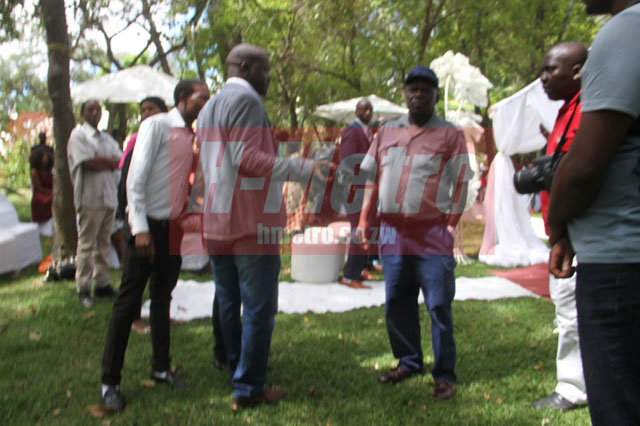 Wedding proceedings continued after one of the pastors in attendance reasoned with the in-laws with the help of police and took them, and this writer, to a place where they monitored the proceedings from a distance.

Pastor Musara accused Lesley of making false allegations that Dorothy’s cousin sister Margret Dongo was aware of his intention to marry Mavis and Lesley apologized over the false statement.

The Mutetwa family showed pastor Musara the lobola list which Lesley confirmed he was charged and he apologized saying he was angered by Dorothy’s character which forced him to marry Mavis secretly.

“We are here because you never gave Dorothy a token of divorce to prove that you are still our son in-law and you have kids with my daughter,” said Dorothy’s mother fuming.

Lesley, whose mother was not part of the guests, blamed his sisters Moleen and Lynet over the token of divorce demanded by his mother in-law.

“My sisters advised me not to give Dorothy a token of divorce saying there was no need and I should only ahead with my plans to marry Mavis and I went to court on the 3rd of February and tied the knot,” said Lesley.

“As for Margret Dongo I never consulted her about my plans I am sorry pastor Musara handitotaudzana naye kunze kwekubatwa maoko chete,” said Lesley while the bridal team waited for him to have ‘kodak’ moments along with Mavis.

“I want to believe most of the guests were against the wedding because many passed through the gate showing their invitation cards and this led us to warn guests not to use cellphones or any other devices to record since we were after making sure the press does not capture any proceedings,” said one of the guests.

“Imi mapinda sei pagate apo nekuti shoko ranga rasimbiswa nderekuti whatever is to happen the press must not be given a chance to record anything,” said one of the guests close to Lesley.