In this season of election where everything is at stake, truth and facts are sometimes sacrificed at the altar of expedience and cheap shots. A time at which technology has afforded everybody the gateway to express themselves has also been a time where people are extremely vulnerable to abuse and emotional chicanery. A case in point is the mischaracterization of Nelson Chamisa’s visit to Joshua Nkomo Museum in Bulawayo.

Here are the facts

MDC Alliance had rally in Bulawayo on Saturday at White City Stadium. Nelson Chamisa before he attended the rally decided to pay his respects to the iconic figure. He decided to visit his home at Number 17 Aberdeen Road in Matsheumhlophe. This house is now a museum that is managed by the Joshua Mqabuko Nkomo National Foundation (JMNNF) .

At the rally at White City Staium this is what Nelson said about the visit:

“I was going there to see the history & contribution. Yes he is one person we need to apologize to. Yes we can’t apologize to the dead, but we apologize to those who are related to him. Because he was abused for liberating this country. He was abused for being the father who wanted peace… But they told me one thing, that ever since Dr Nkomo died , you are the first national leader to come here. So we wanted to give you a walking stick. Induku! .. So yes Dr Nkomo represented what Dr Tsvangirai represented” 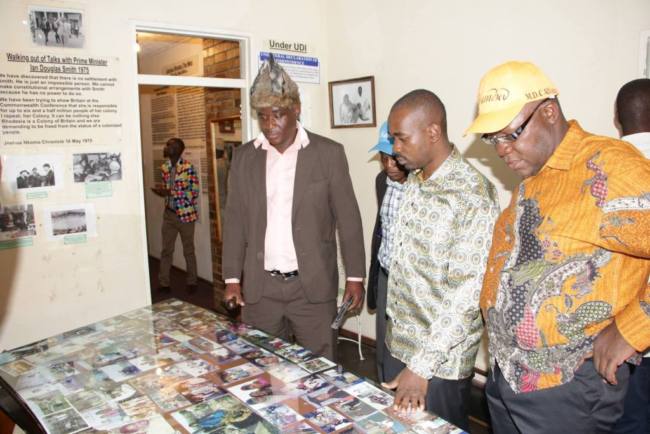 Now the politics. Emmerson Mnangagwa and the military junta running Zimbabwe by force today presided over the worst massacre of civilians in Southern Africa since the 1904-07 Herero Genocide. For six years him as Minister Of State Security and the likes of Perence Shiri as commanders of the 5th Brigade provided the command and direction that resulted in thousands of people of Ndebele ethinicity being butchered mercilessly. He knows people know about it. He knows that he directly contributed to the death of one of the gallant commanders of the liberation struggle Gen Lookout Masuku whom he refused access to healthcare after prolonged torture. He was the running dog that was unleashed at Nkomo by Mugabe until the revered old man had to go into exile. He knows the people of Matebeleland remember these things.

Now, he would rather defecate on the table that his victims set out to receive those who revere them than see them go about their business with dignity. Nelson’s visit exposes Mnangagwa’s government as a regional, isolated collection of tribal supremacists who are happy keeping other people in their place. Instead of celebrating the rich legacy that we were left by the man he hounded, he would rather unleash his running dogs (zvimbwasungata) to attack and threaten the Nkomo family and the Joshua Mqabuko Nkomo National Foundation.

They have descended into their propaganda war mode. Their goal is to meticulously and ruthless hound Chamisa in the same way they have hounded many before him. Their goal is to discredit him as an immature and dishonest leader. So at every opportunity they erect distorted scenarios which they feed to their agents and balloon into a well-orchestrated media spectacle. This is a propaganda onslaught on a civilian leader using state machinery and resources by an unelected and unelectable junta.

It remains necessary that citizens remain vigilant and start profiling the running dogs of this junta. It is a propaganda war which of course they will lose!