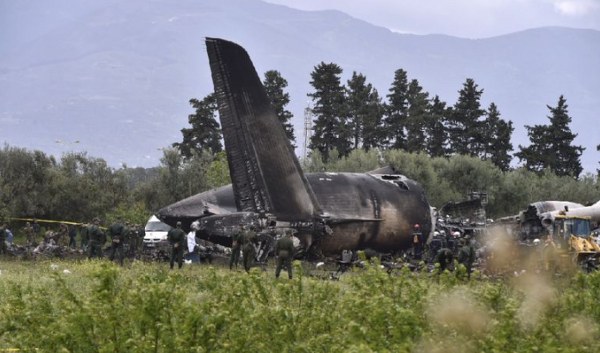 An AFP photographer at the scene saw the charred wreckage of the plane in a field near the Boufarik airbase from where the plane had taken off.

Hundreds of ambulances and dozens of fire trucks with their sirens wailing rushed to the scene of the crash about 25 kilometres southwest of Algiers.

The defence ministry said in a statement that 247 passengers and 10 crew were killed without mentioning any survivors.

Deputy Defence Minister General Ahmed Gaid Salah visited the site and ordered an investigation into the circumstances of the crash, the defence ministry said.

The Ilyushin II-76 transport plane was bound for Tindouf in southwest Algeria.

Algeria has suffered a string of military and civilian aviation disasters.

Two military planes collided mid-flight in December 2012 during a training exercise in Tlemcen, in the far west of the country, killing the pilots of both planes.

In February 2014, 77 people died when a military plane carrying army personnel and family members crashed between Tamanrasset in southern Algeria and the eastern city of Constantine.

Only one person survived after the C-130 Hercules transport aircraft came down in the mountainous Oum El Bouaghi region.

The defence ministry blamed that crash on bad weather.

An Air Algerie passenger plane flying from Burkina Faso to Algiers crashed in northern Mali in July 2014, killing all 116 people on board including 54 French nationals.

In October the same year, a military plane crashed in the south of the country during a training exercise, killing the two men on board.

That came more than a decade after all but one of the 103 people on an Air Algerie Boeing 737-200 died in March 2003 when it crashed on takeoff in the country’s south after an engine caught fire.