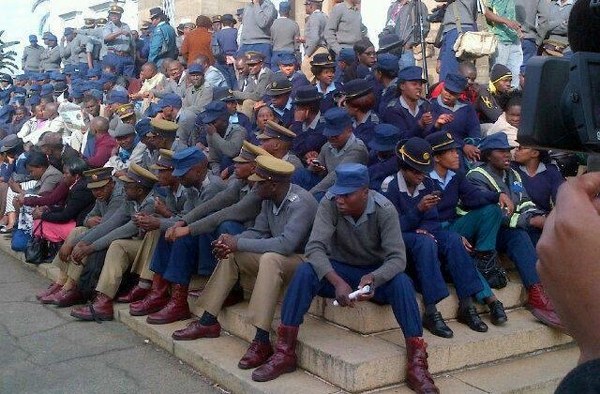 Junior police officers are reportedly sulking with government’s recent decision to drastically reduce the number of roadblocks across the country, are resisting new duties such as foot patrols.

The bitter cops are choosing instead to spend time at stations chatting on WhatsApp platforms according to a senior police officer.

A decision was made last December to reduce the number of police roadblocks across the country following a national outcry that they were unnecessary and had become a menace as police officers manning them were extorting motorist.

According the officer commanding Marondera district, Superintendent Khama, the decision has proved to be unpopular with junior police officers who are resisting orders to patrol the streets and are instead spending time in their offices chatting on social media platforms.

Khama was addressing police officers in Marondera town this week at the launch of the “Police Visibility Patrols”, a programme that seeks to encourage junior police officers to embrace foot patrols.

“You cannot do selective duties. One cannot choose which work to do or not to do. We should not even shy from our work,” he said.

“Leaving an area of patrol without permission, loitering or sleeping in one’s car whilst on duty will not be able to reduce crime. Police officers are remaining in the comfort of their offices, busying themselves on WhatsApp platforms.”

The senior cop said having police officers on the streets and known crime prone areas would reduce the crime rate in the country.

“Remaining stuck in our offices will not help an elderly woman being harassed by touts some 500 metres from the police station,” he said.

“Those who made the mistake of taking the police oath should submit their resignation papers. That would help the nation. The ZRP should not be home for desperate jobseekers. Only those committed to duty should remain as police officers.

‘Be proud of foot patrols’

The ZRP chief urged the police officers to be proud of their foot patrols, have good cheer and be gracious to members of the public. He also asked his juniors to exercise restraint and not to assault offenders and show respect at all times.

Videos & Pics Sekai Moyo - 21 October 2020 0
Reinstated MDC-T secretary-general Douglas Mwonzora was left embarrassed after only 15 people, including himself, turned out for a rally in Chivi Central constituency, a...

‘He penetrated my punani without a cond0m, I was scared he’d imprεgnate or infect...

News Muza Mpofu - 21 October 2020 0
Residents in Harare’s Waterfalls suburb are baying for their MP, Tapiwa Mashakada’s head and want him recalled for being an absentee legislator. The disgruntled residents,...

News Muza Mpofu - 21 October 2020 0
I TOLD you to stop cheating, but you never listened. These were the last words Sphiwe Msimango said to her husband as he lay in...

Give us a signal: Pressure piles on President Emmerson Mnangagwa as economy burns

News Muza Mpofu - 21 October 2020 0
PRESIDENT Emmerson Mnangagwa is tomorrow expected to address several challenges facing the country when he delivers his State of the Nation Address (Sona). This comes...

News Muza Mpofu - 21 October 2020 0
Harare City Council head of planning, Mrs Priscilla Charumbira, has been arrested on allegations of abuse of office conniving with some councillors, including former...

News Muza Mpofu - 21 October 2020 0
GOVERNMENT has invited the MDC Alliance and MDC-T to grace the SADC Anti-Sanctions commemorations set for 24 October. Due to the Covid-19 pandemic, it remains...

We will beat Chamisa’s MDC Alliance in by-elections: Day-dreaming Douglas Mwonzora speaks out

News Sekai Moyo - 21 October 2020 0
ZANU PF and MDC Alliance are in for a rude awakening as the MDC-T is poised to grab the majority of seats in the...

News Tshuma Rueben - 21 October 2020 0
The burial of the seven-year-old boy, Tapiwa Makore, killed and dismembered in a suspected ritual murder in Murehwa, will be delayed as police need...
Loading...