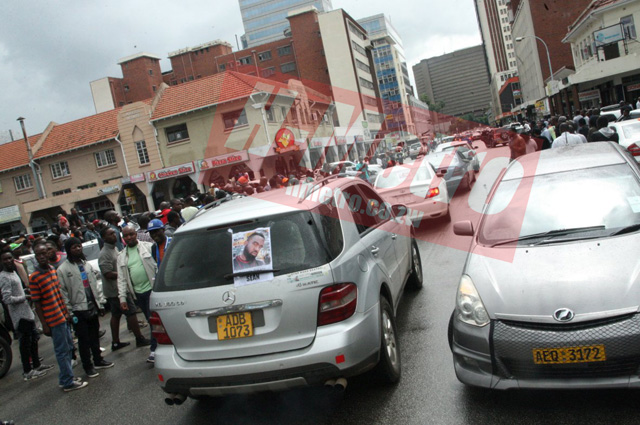 Business came to a stand-still on Wednesday in the Harare CBD when hundreds of city dealers paid their last respects to one of their colleagues in style.

The deceased, who was only identified as Sean, was a well-known dealer at Corner Jason and Angwa Street commonly known as Ximex Mall. He died earlier in the week after being in and out of hospital.

Sean got merry send-off from his associates, friends and family in a funeral convoy all the way to Zororo Memorial Park in Chitungwiza.

The mourners were in and out of their cars blowing horns, drinking, cheering, singing and dancing in celebration of Sean’s life as well as taking pictures and videos.

The crowd that blocked most of Angwa Street, Nelson Mandela and George Silundika, was characterised with all sorts of dealers.

Traffic along Angwa street, Nelson Mandela, Jason Moyo and George Silundika also came to a stand-still as the crowds scattered all over the roads with their cars blocking traffic.

One of the crowd members, a lady who was drinking said that Sean’s death was unexpected and very painful as he was one of them.

“Yes, he was sick, in and out of hospital but nobody ever thought he would die so soon. I have known Sean since 2008 and he was a great hustler, there was nothing he couldn’t do.

“Remember the first days when people started exchanging money in the street, Sean was one of the first people to do that and a lot of people knew him because of that.

“I am very hurt, Sean is gone, he will forever be missed,” she said.