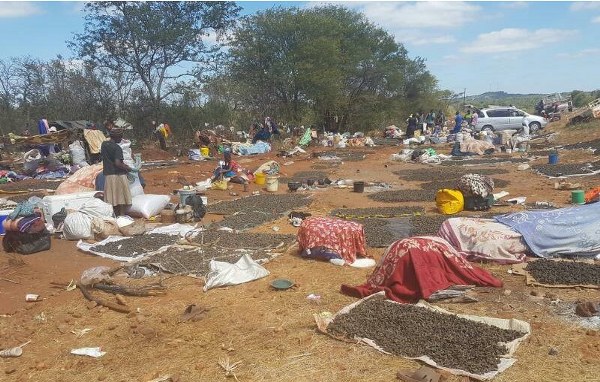 Villagers in Gwanda are up in arms with people from other provinces who have swarmed the district to harvest mopani worms.

Thousands of people drawn from provinces outside Matabeleland South recently descended on the area between Gwanda town and West Nicholson to harvest the mopani worms, popularly known as amacimbi locally.

Some villagers in the Mawane area said there was need for the government to act.

Relebile Nare said they were losing patience with the “foreigners” that had taken over their area.

“When they come here they tell us that Zimbabwe is for everyone,” she said.

“We have been quiet for a while, but now we will take the law into our own hands as our leaders are failing to act on this issue.

“EMA [Environmental Management Agency] is just around the corner, but they are not doing anything to prevent the damage to the environment.”

Another villager, Mnjalifa Dube, said they had started chasing away people who had become uncontrollable.

“The area is dirty. These people don’t have accommodation and proper structures. as a result, they relieve themselves in the bush close to our sources of water,” he said.
“They don’t care because they will leave once they are done with harvesting Amacimbi. They are exposing us to serious diseases.”

Nhlompo Ncube said the situation posed a threat to their livestock, which was now feeding on the plastics strewn around their pasture.

“Our livestock now eat plastics and condoms,” he said. “As I speak, one of my neighbours’ cows died after consuming these plastics and our goats are picking up used condoms. This must stop.”

Gwanda Residents’ Association secretary-general Bekezela Maduma Fuzwayo said it was unfair that local people were not benefiting from the mopani worms.

“It is sad that our elderly people who should be harvesting the worm are not benefiting,” he said.

“In some instances, they fear that they might be attacked in the bush because there are strangers within their backyards.”

“Our chiefs should protect our elderly people the worms are part of the economic base,” he said.

“In places like Honde Valley, locals harvest bananas and people from other areas buy from their local markets.

“People don’t harvest without the permission of the locals, so this must apply to us as we are all Zimbabweans.”

Sithembokuhle Moyo, the EMA public relations manager for Matabeleland South, said they were aware of the issue, but the authority was not empowered to intervene.

“As EMA, we conducted our survey and we told people in those areas how they should clean up the area once they are done,” she said.

“As for firewood and waste management, I believe other government departments can be in a better position to comment because tree cutting is dealt with by the Forestry Commission and not us.”