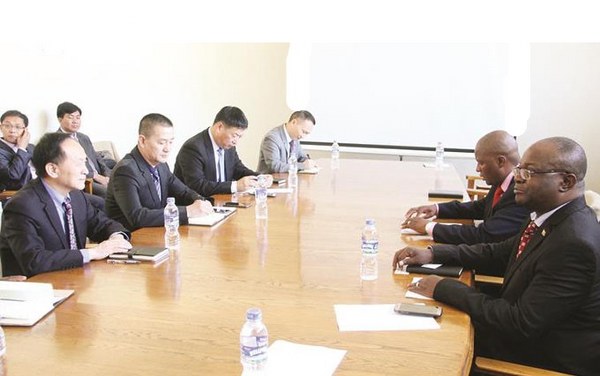 China has sent an 11-member delegation to Zimbabwe as a follow-up to President Mnangagwa’s State visit to the Asian economic giant early this month where several business deals were signed, while relations between the two countries were elevated to the highest status.

The delegation is exploring investment opportunities in various sectors in response to President Mnangagwa’s invitation and call that Zimbabwe is now open for business.

The Head of State and Government was in China two weeks ago where he sealed multiple business deals that will result in new projects, including giving traction to those that stalled under the previous political administration.

The latest Chinese delegation to arrive in the country on a week-long exploratory mission is led by China Trade Promotion Centre director Mr Tan Wenbao.

The organisation falls under China’s Ministry of Commerce.

Mr Mbaiwa said the visit by the Chinese delegation was triggered by President Mnangagwa’s recent State visit to the Asian economic giant.

“Their arrival is in response to the invitation that has been made by President Mnangagwa through his message that Zimbabwe is open for business,” he said.

“We met some of the officials who came from China a few days ago and they indicated that they wanted to come and they have done so. When the President spoke and we interacted with them, we then cemented everything and from our discussions more delegations are headed for Zimbabwe.

“In terms of infrastructure development, they are also meeting Infrastructure Development Bank of Zimbabwe (IDBZ), which has a database of project seeking funding investments. In agriculture, they have interests and meetings have also been lined up.”

The Chinese delegation is meeting IDBZ officials today, while engagements with various ministries are expected on Thursday.

“They have just came on an exploratory mission, and this is the first step which we expect to produce results,” said Mr Mbaiwa. “We expect the meetings with the regulators and players to guide them in their determination.

“They also want to sign a Memorandum of Understanding with us, which outlines how we can cooperate in areas of trade and investment. They are sending it and we will look at it.”

Among the deals sealed during the visit was the US$1 billion Hwange Thermal Power Station project, which had been floundering for three years.

Funds to start work on units 7 and 8 of the plant will be released immediately.

Other projects that will get immediate funding totalling about US$1 billion include Robert Gabriel Mugabe International Airport expansion, the new Parliament Building in Mt Hampden, NetOne’s expansion, refurbishment of Morton Jeffrey Water Treatment Plant and construction of a pharmaceutical factory.

Zimbabwe and China also signed a US$1 billion tourism Memorandum of Understanding.

Teen boy rapes girl (14) after giving her soft drink mixed with alcohol as...

News Sekai Moyo - 3 July 2020 0
AN 18-year-old boy has been arrested after he allegedly drugged his friend before rap_ing her after giving the 14-year-old girl a drink mixed with...

Disaster as married man finds ARVs in maid's handbag after having unprotected se_x with...

News Edmore Huni - 3 July 2020 0
AN ex-Lupane State University laboratory technician who fatally assaulted his 52-year-old maid whom he was having an affair with after discovering that she was...

News Muza Mpofu - 3 July 2020 0
Acting MDC-T secretary-general Douglas Mwonzora is reportedly acting on his own in recalling MDC Alliance MPs in order to prepare the ground for taking...

2 men pounce on homestead, rape vamwene and muroora and get away with 4...

News Nelson Bhebhe - 3 July 2020 0
TWO armed men pounced at a woman’s homestead while she was sleeping with her daughter-in-law and violently robbed them of their cash and cellphones...

News Cynthia Goba - 3 July 2020 0
ALTHOUGH it looked very dangerous, the late Father Zimbabwe Dr Joshua Nkomo’s knobkerrie which was his trademark throughout his life was not just a...

Chaos as man refuses to pay lobola after staying with lover for 10 years:...

News Muza Mpofu - 3 July 2020 0
LOVING someone is not a reason to be with them if they do not love you back. When you really love someone, you don’t...

Well-known prophetess overpowers church member at night, goes on top and does the unthinkable

News Muza Mpofu - 3 July 2020 0
A Well-known Gweru-based prophetess and church leader has been arrested for allegedly f0ndling, kiss_ing and inserting her fingers in the private parts of a...

News Sekai Moyo - 3 July 2020 0
Police in the Midlands have launched a manhunt for a Mberengwa man who fatally assaulted a woman for turning down his love proposal. The man,...

News Muza Mpofu - 3 July 2020 0
TRANSFORM Zimbabwe leader Jacob Ngarivhume has urged Zimbabweans to voice out against economic and political challenges as well as corruption facing the country through...
Loading...