NPF Statement on the occasion of our independence celebrations

Harare 17 April 2018. The National Patriotic Front wishes to congratulate the people of Zimbabwe on the occasion of our country’s 38th independence celebrations. This year’s celebrations, five months after the army grabbed power from the constitutionally elected government of our country’s founding father, President Robert Mugabe, are a double headed janus. We are, of course, happy that we have attained 38 years as a country but sad that we have allowed a few rogue elements among us to usurp power from the people.

As we celebrate 38 years of our existence as a nation state, we should reflect on the fundamental values that make as a people, the values chat gallant sons and daughters of this country put their lives on the line for.

We should remind ourselves that the liberation war which brought the independence that we am celebrating today, was fought in order to achieve self-determination and to build a democratic country where…black and white would enjoy together as envisioned by General Josiah Magama Tongogara. The Zimbabwe we should be celebrating today is one M WhiC h -our swords- were supposed to be turned into ‘plough shares’ as aptly put by our founding President, Cde Mugabe. It is a Zimbabwe that was built on the rock of national reconciliation, itself a nation state informed by the liberation war dictum that -politics leads the gun-.

However, we find ourselves today, in an uncanny situation where those we entrusted with spears to protect the people, never turned their weapons into productive instruments for social security, but, instead turned them into weapons of usurping power from the people, instruments of coercion not protection.

As we celebrate our independence. we should be cognisant of the plight of those whose fathers, mothers. sons and daughters were killed internally and externally displaced. raped and maimed during the November 15 2017 coup.

Our thoughts should be with those that were tortured, harassed and humiliated for trying to protect a constitutionally elected people’s government. We reflect, today on the reversal of the gains we had made as a country, in our attempts to fulfill the objectives of our liberation struggle.

Today, our people who had gotten land, the top national grievance that led thousands to take up am against the racist Ian Smith regime, face the gloom reality of that Lind being returned to our erstwhile colonizers by, ironically, the people who staged a coup to ‘restore’ the ‘legacy of our founding fathers. We are saddened today that the coup plotters am sacrificing all the pro.black and empowerment policies that President Mugabe had introduced in order to get recognition and endorsements from ow-former colonisers.

It is sad that as we celebrate our 38th year of self-determination, we are faced with the gloom reality of an illegal regime doing everything to reverse the land and indgenization policies that had been set in motion as vehicles for creating a generation of black landowners and industrialists all under the guise of a useless anecdote that °Zimbabwe is open for business.”

We, today, stand by the graves of Cde Joshua Mqabuko Nyongolo Nkomo, Cde Alfred Nikita Mangena, Cde Simon Vengesai Muzenda, Cde Sally Mugabe, Cde Josiah Magama Tongogara, Cde Rex Tapfumaneyi Solomon Mujuru and many others who either lie at the National Heroes Acre or elsewhere even in unmarked graves and ask the question, “Is this the Zimbabwe we want?”

We come in the spirit of Mbuya Nehanda and Sekuru Kaguvi and ask the question, “ls this what you died for?” We introspect, intellect and ponder over what needs to be done. Yes we should talk of how nurses can be incentivised to go back to work. We should also plan on how teachers should be made to stay in the classroom, how our soldiers can be made to concentrate on provision of national security that we badly need, and indeed, we should have a plan an how the whole civil service should be empowered in order for smooth policy implementation.

But, we need to confront the elephant in the room first which is an illegitimate and illegal government which is the result of the November 2017 coup. Today. we should come to our senses and realise that an illegitimate and illegal government cannot proffer solutions to the cash crisis. It cannot build new mad a. rail infrastructure because it has no mandate to do those things.

In NPF we understand the plight of our people in the rural areas. We are aware that Zanu PF under Emmerson Mnangagwa is threatening to take away land from resettled black farmers and hand it back to former white farmers

We are cognisant of the dangers that cholera and other diseases pose to our people in both rural and urban centres and the need for a clear and sustainable heath system that guarantees longevity to our most precious resource, the human resource.

We know the dire need for immediate retooling of the manufacturing industry in order for us to have cheaper. locally produced goods in t. market and jobs for our people. We understand the importance of foreign direct investment but we believe that with a domestic debt of $11bn compared to $5bn external there is empirical capacity by our local investor to put money into our economy should the right environment and incentives obtain.

Therefore, Zimbabwe should be open for business, first to the locals (indigenization) before opportunities are sold out to foreigners for quick loot to line pockets of those that have been looting our diamonds, gold and platinum.

Today we urge every Zimbabwean to look the regime in eye and declare that independence means self-determination not military rule.

We should restore our country back to civilian rule, back to the people if the day we are celebrating today should have meaning. We urge our people to register to vote in the harmonised elections due in three months for this is an opportunity to address the illegality presiding over the affairs of this country. We should vote out the coup government to restore the legacy of majority the that our independence brought us.

May God bless us all 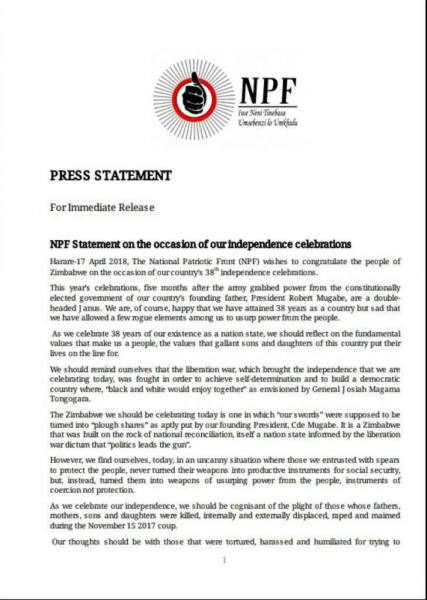 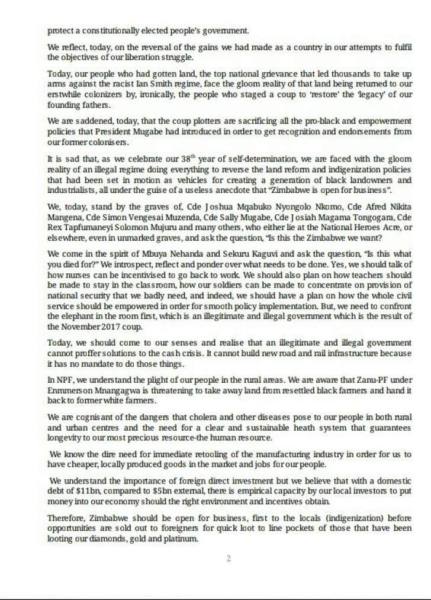 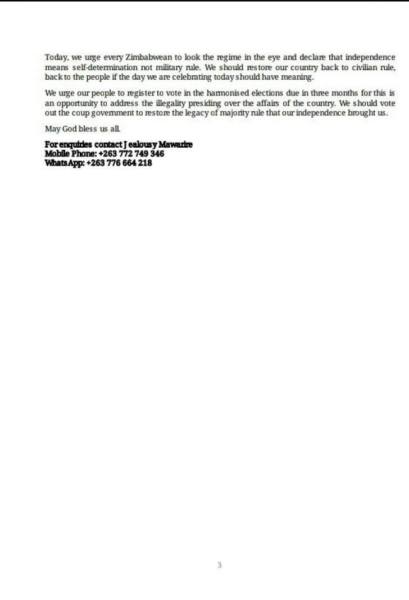 News Muza Mpofu - 23 October 2020 0
A WOMAN from Bulawayo went berserk after she stumbled on a teenager performing sεxual acts on her nakεd daughter. The incident that has since spilled...
Loading...