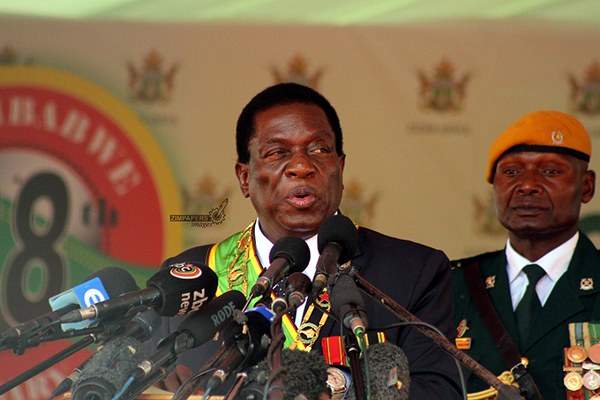 1000: Today Zimbabwe celebrates 38 years of independence from colonial bondage, both the old and young are thronging the National Sports Stadium (NSS) to mark the event. The NSS is playing host to the main celebrations but all the country’s provinces are also marking this important day at various centres.

1001: President Mnangagwa invited all political parties to attend the celebrations.

1017: Members of the country’s uniformed forces now march into the stadium for the parade. Their drills receive cheers and ululation from the crowd.

1018: Religious groups representing various denominations are also at the event.

1023: Detachments from the ZNA, AirForce, ZRP and Zimbabwe Prison and Correctional Services are part of the parade. 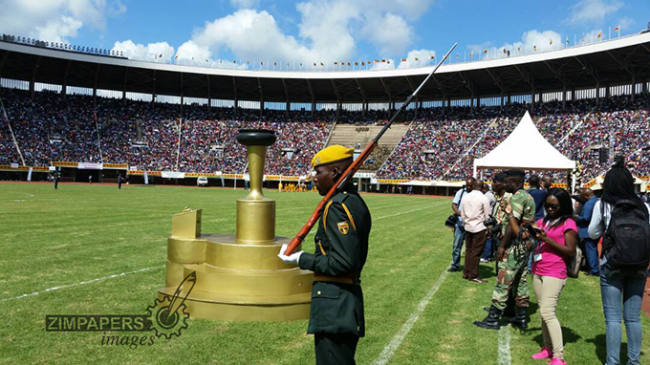 1044: Some of the placards here carry various messages of reform and economic rebirth, among them, “Reforming for Efficiency” “A New Dispensation for Economic Prosperity” “Land + Investment Hard Work + Efficiency = Success”

1100: MDC-T president Nelson Chamisa has just arrived. Chamisa urged his supporters to be part of the independence celebrations as it is a national event.

1106: Crowd singing along to Jah Prayzah’s “Kutonga Kwaro” as President Mnangagwa and the First Lady wave at the people. This is the first independence celebrations to be officiated by President Mnangagwa since his ascendancy to the Presidency following the resignation of former President Robert Mugabe.

1107: The singing of the National Anthem marks the start of the official proceedings

1122: President Mnangagwa finishes inspecting the parade. He is now at the podium where the parade commander asks for permission for a slow and quick march. 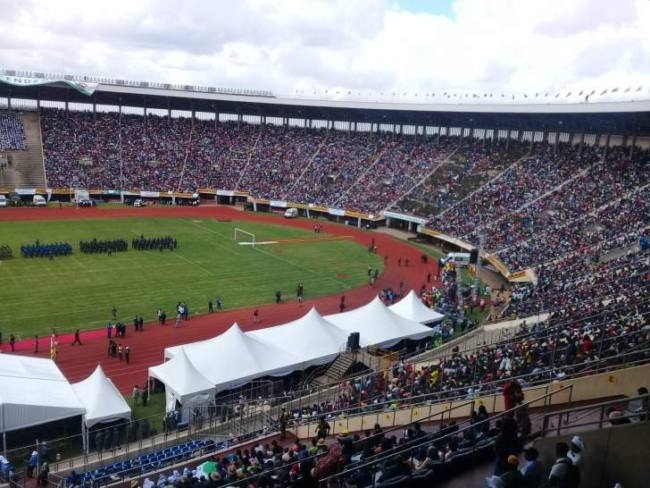 1145: The parade ends as the Torch bearers enter the stadium.

1146: President Mnangagwa is given the torch and lights up the Independence Flame. First Lady Amai Auxilia Mnangagwa releases pigeons into the sky. Pigeons released represent peace and love, themes that have defined the New Dispensation led by President Mnangagwa. 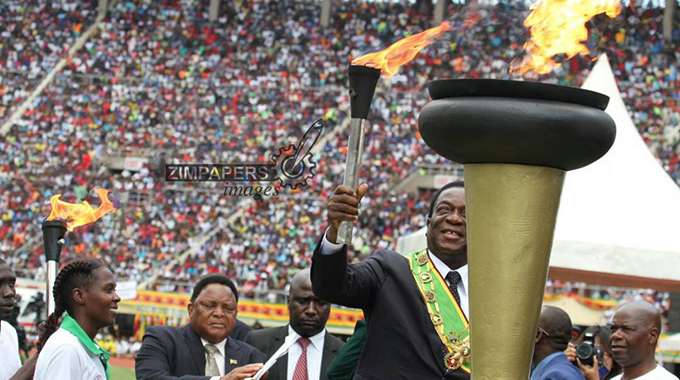 150: Local Government Minister July Moyo takes to the podium and invites Bishop Manhanga to give an independence dedication.

1200: Minister July Moyo is now back on the podium.

1202: “We are all bound together by the love for Zim despite political affiliation. Operation Restore Legacy was there to restore the founding values of our liberation struggle,” says Minister Moyo as he asks President Mnangagwa to give his keynote speech.

1206: President Mnangagwa is now on the podium salutes all those in attendance.

1209: “It is my pleasure to welcome you to this historic event. This year’s celebrations are significant as they are first under new dispensation. We honour our fallen heroes and may they be remembered for the freedom we enjoy today,”

1212: “We need to progress together despite creed and language…our 38 years of independence have not been without challenges, opportunities have been missed and mistakes have been made. Fellow Zimbabweans, at my inauguration I underscored the need to pursue rapid economic growth, in this endeavour my administration’s pursuit is enhanced investment and job creation.”

1215: “For the challenges we face, we need to focus on the pursuit of economic recovery, poverty reduction, rehabilitation of social services and respect for rule of law. We need to protect and encourage private sector enterprises. We need to fight corruption. We will not achieve our goals overnight. But through discipline, we will realise our goals. Zim will rise again and be great.”

1218: “The renewed spirit of hope and determination by our people is encouraging. The goodwill we continue to receive is positive. We have positive changes in the mining, agriculture and tourism sectors. Government is ensuring food sufficiency through Command Agriculture.”

1219: “We have availed money to beef up and sustain Command Agriculture. We also need to protect the forestry industry. We are strongest when we work together. We are confident our efforts will improve the livelihoods and incomes of our rural community. We are also trying to minimise adverse effects of climate change by constructing dams.”

1221: “China has pledged to assist us in meeting our endeavours. Russia and Belarus have made firm commitments to set up agriculture and mining plants in Zimbabwe.”

1225: “New Government has a new way of doing things and we have amended the indigenisation policy. We have opened various sectors to the world.”

1227: President Mnangagwa says revitalisation of Zisco and the railway sector are crucial for rebirth of the manufacturing sector. He says Government is attending to various issues that enhance competitiveness.

1230: “We need the country to engage in global best practices. We are committed to availing scholarships. This is a key goal for Government. We need to look at ICT projects as they help our young to thrive in economic development. We have a heart for infrastructure development. Beitbridge, as well as the modernisation and expansion of the RG Mugabe International Airport, are priorities.”

1234: “The commissioning of the Kariba South power plant has helped our power supply. Soon Hwange power plant will be improved. The tourism sector is improving as shown by the increased arrivals of tourists which is boosting our attractiveness as a good tourism destination. There is need to revitalise the social services sector. We are mindful of the rural population. We need to create vital rural economies. We are also ensuring availability of drugs.”

1236: “We need to deal with violence perpetrated against women and girls. The Basic Education and Assistance Model seeks to assist 400 000 students from now through to August. Government seeks to observe good corporate governance. Following our engagement with China, water problems in Harare will soon be a thing of the past.”

1238: “We know hardships associated with unavailability of cash, we are all working to address that in earnest. We will resolve shortages of cash in the economy. Our efforts are guaranteeing investor confidence. I urge the finance sector to have robust strategies that translate to demands of the economy. Surely, Zimbabwe is Open for Business.”

1240: “We need to establish the one stop shop investment centre. To improve efficiency, good governance in public sector is crucial. We need to fight corruption. We need to reform parastatals. We are open for business in all facets.”

1242: “To all workers, i urge you to work hard with good ethics and as we grow our economy we also seek to address your issues. We have received commitments from the around the globe because of our willingness to open a new chapter with rest of the world.”

He says during his regional and international trips, he met diasporans whom he briefed regarding situation at home and invited them to make contributions towards economic recovery.

1245: “We need to modernise the economy of our great country. The surmountable task to build our economy is for us together.”

1247: President Mnangagwa says the culture of dialogue will enhance accountability to the people and this will help the nation achieve its goals. He commends the ZDF and other security arms for maintenance of peace in country.

1249: “In a few months’ time, we hold harmonised elections. I urge all political leaders to shun violence, hate speech in all our contestations. We have invited countries to observe our elections from Sadc, AU and EU. Elections will be free and fair.”

1251: “Let us think big of our country. Nothing is impossible. We shall rise. Happy 38 years of independence. Long live our country, long live our freedom. God bless you and God bless Zimbabwe.” President Mnangagwa says he finishes his speech.

1254: Parade commander asks for permission from President Mnangagwa to march off the parade square.

1318: People are being entertained by mass displays at the moment.

1410: The mass displays continue to entertain the people as we conclude our updates. Thank you.