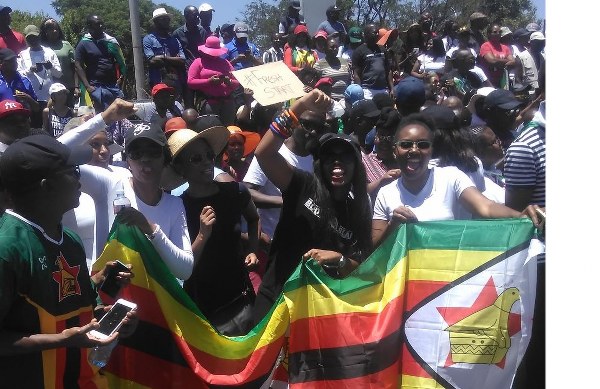 Thousands of Zimbabweans who attended MDC Alliance presidential candidate Nelson Chamisa’s rally in Thembisa, Johannesburg, last week said they were ready to catch earliest bus back home as soon as the opposition leader is declared winner of this year’s presidential race.

Some Zimbabweans who travelled as far as Nelspruit, Cape Town and Port Elizabeth said they came strictly to meet the MDC Alliance principals to tell them that they were fed up of living in South Africa.

Kelvin Kufakunesu from Nelspruit said Zimbabweans were tired of doing menial jobs and living far from their families.

Speaking during the rally, MDC-T youth secretary for South Africa, Oscar Madanhi said most young people had registered to vote and would certainly return to Zimbabwe on election day.

“Some are even rounding up their operations in preparations for the elections. If Chamisa wins, most people are going to leave South Africa for good, including myself,” Madanhi said.

“The reason why we are here is because Zanu PF ruined our future and for one to think that (President) Emmerson Mnangagwa will give us reason to come home if he wins is actually day-dreaming. To start with, he is the architect of the economic chaos in Zimbabwe for the past 38 years. So he has no solution to the problems he caused.”

The rally, which was addressed by alliance principals among them Tendai Biti and Welshman Ncube, attracted over 5 000 people.

Biti said there was need to protect the vote in order to give hope to the youth.

“Among the conditions is removing the army from Zimbabwe Election Commission and rural areas where they have been deployed to intimidate voters.”

Trust Ndlovu, who is the MDC Alliance co-ordinator in South Africa, said the youths were eager to return home if Chamisa wins the election.