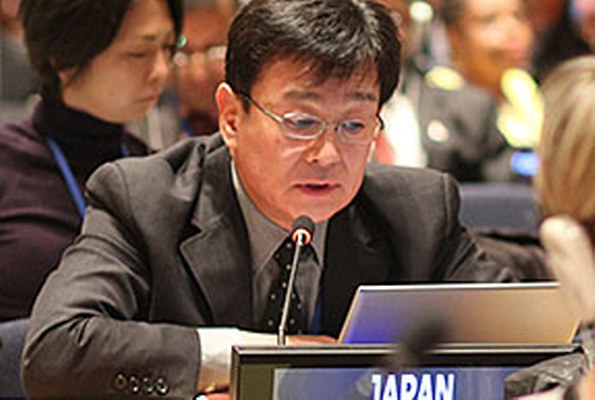 Japanese Assistant minister and Director General of African Affairs, Ambassador Takeshi Osuga has called on President Emmerson Mnangagwa to ensure that the country holds free and fair elections this year to facilitate enhanced bilateral cooperation that will boost the economy.

In an interview with NewsDay during a recent visit, Osuga said Japan wanted to see the implementation of reforms being promised by the new administration.

“I conveyed the wish of my government to Industry, Commerce and Enterprise Development minister Mike Bimha during a policy dialogue meeting that the upcoming elections should be held in a free, fair and credible manner,” he said.

“On the basis of that election we will work forward to strengthen our ties with Zimbabwe in years to come. We are waiting for the new government to go through democratic processes and that is through elections.”

Osuga added: “The government of Japan is keen to see the positivity that is being spearheaded by the government to continue and then we can work with Zimbabwe in various sectors of the economy.”

He said the Asian economic giant was ready to facilitate for Japanese companies to invest in Zimbabwe on condition that their investments were secure and the economic environment is stable for business especially in the private sector.

Osuga was in Zimbabwe for a policy dialogue meeting with the government and as a follow-up to the visits by Vice-President Kembo Mohadi last month and former President Robert Mugabe in 2016.

Zimbabwe’s main opposition has reportedly said that there would not be any elections without the necessary electoral reforms.

Movement for Democratic Change leader, Nelson Chamisa said that his party would not allow President Emmerson Mnangagwa to run an election if it was not satisfied with reforms.

Chamisa said that without his party an election was unlikely going to happen as the “leading” opposition party in the country the MDC would not accept a “drama of an election.”

The opposition presidential candidate said that he did not trust the electoral body as it was filled with Mnangagwa’s allies from the military.

“We have done a forensic audit of who does what in the Zec (Zimbabwe Electoral Commission) secretariat and most of these are of dubious credentials, apart from those who of course served the army and left. Former members of the military can of course serve in any State institution but there are people from spooky organisations and we must chlorinate them because they contaminate Zec.

“It does not inspire confidence to continue to have them. We will engage Zec, if they want they can share with the public,” Chamisa was quoted as saying.

President Mnangagwa vowed to hold free and fair elections to ensure Zimbabwe “engages the world as a qualified democratic state”, according to the state-owned Herald newspaper.

Under ex-president Robert Mugabe, who had ruled since 1980, Zimbabwean elections were marred by vote rigging, intimidation and violent suppression of the opposition.

Mnangagwa was one of Mugabe’s closest allies in the ruling Zanu-PF party, and he is accused of playing a key role in the authoritarian regime that left the economy in ruins.

Mugabe, 94, was forced to quit when the military took power and once-loyal Zanu-PF lawmakers launched impeachment proceedings against him.