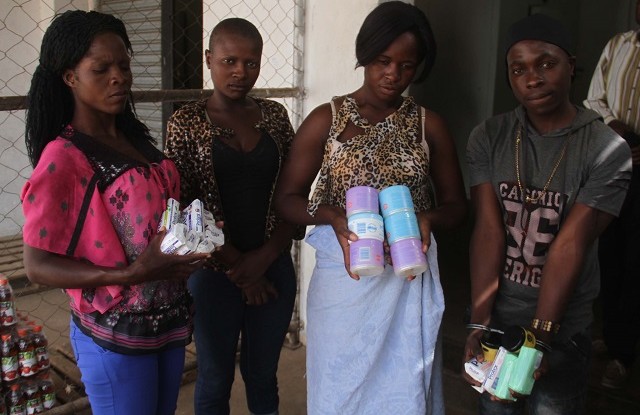 A SYNDICATE of shoplifters operating in Bulawayo was caught in the act, thanks to an alert security officer.

The four only mentioned on first name basis Patience, Melissa, Amanda and Khuzwayo, the only man in the crew, were caught at TM Supermarket in North End suburb.

The store's security officer Brave Moyo told B-Metro that he became suspicious of the two women because of their movements in the shop.

"Melissa and Patience were moving about in the shop spending a lot of time without taking their items to pay at the till point," he said.

"They only made their way to the till point 30 minutes later with very little in their trolleys, raising suspicion. When they got to the till area they suddenly ditched the groceries and left the store.

"I rushed to the entrance and caught them. We searched and found them with goods stuffed in their underwear," he added.

Moyo locked the culprits in the security room for trying to steal hair food and 13 tablets of Protex bath soap.

However, after an hour another pair of thieves pounced at the shop and were busted as they tried to get out in similar fashion.

"After an hour we caught Khuzwayo and Amanda with two packets of pads stuffed in their panties and Handy Andy washing liquid hidden between their legs," said Moyo.

TM North End assistant branch manager Artwell Homela said the total value of the goods stolen by the four was $66,92.